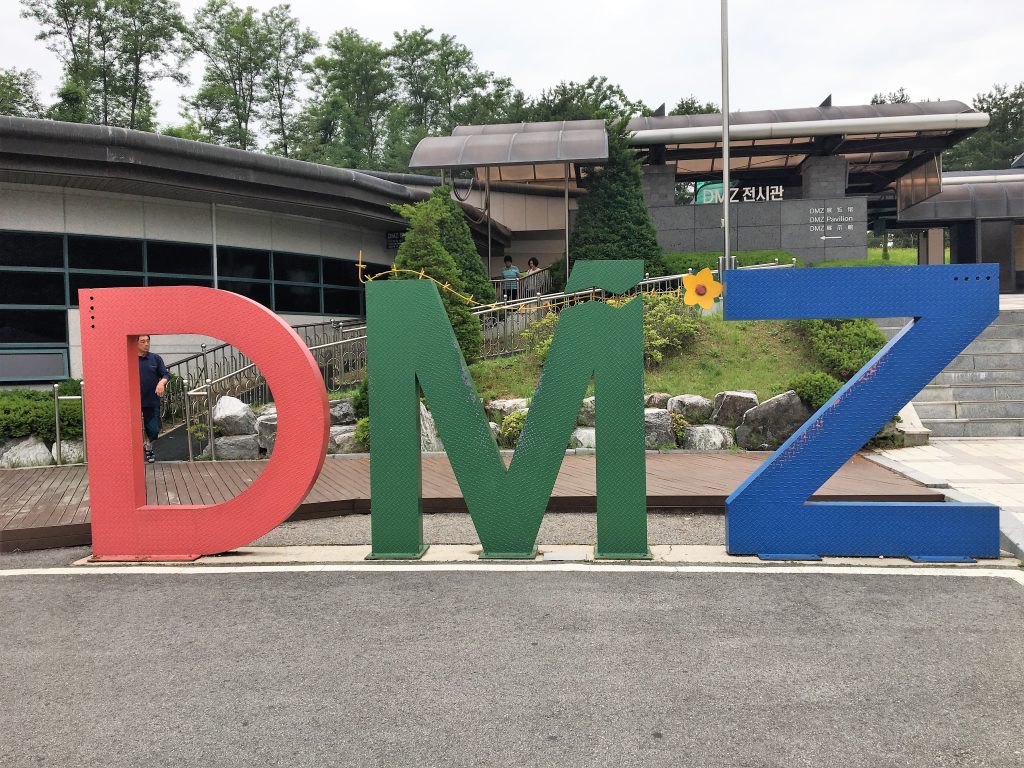 What is the DMZ?

As the summit between North Korea and the United States is about to take place and many people have heard of the DMZ, I still think it’s important to clarify exactly what it is.

The Demilitarized Zone (DMZ) between North and South Korea is a 4 km wide swath of land that runs for about 250 km roughly east to west across the Korean peninsula. The actual border between North Korea and South Korea is called the Military Demarcation Line (MDL), and the DMZ is 2 km on each side of the MDL. This was agreed upon in 1953 so that each side would have a buffer along the MDL and wouldn’t “accidentally” do something against the Armistice Agreement.  In the middle of the DMZ there are a few small villages of South Koreans that are given special permission to be there because of ancestral heritage. Otherwise, the only human occupation is from the JSA (Joint Security Area) where the two sides can meet and prisoner exchanges can take place. It’s the pictures you see with the blue buildings and the soldiers from each side standing and staring at one another. 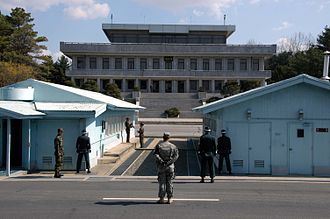 Other than the JSA and some villages, the DMZ is an animal sanctuary. There are forests, streams and 1.8 million land mines still left from the Korean War. The South Korean military is still working to remove land mines, but our guide told us that animals still set them off occasionally, and when there are heavy rains, they are taken in the runoff down to rivers and floodplains where they also explode.

Before the tour, I really didn’t know much about the Korean War or the DMZ in general except that it was the border between North and South Korea.  I did not realize that the JSA is a part of the DMZ that you have to have special permission to visit (meaning a more secure tour that what we did). So, as much as it pains me to say this – we did not see the blue buildings or the MDL or the guards staring at each other.

What we did see started off as a little surreal. We went to a carnival.

The city of Paju is one of the closest to the DMZ boundary area. At the edge of Paju, right before a checkpoint, is a tourist area called Imjingak. At Imjingak, there are several memorials to families split apart by the Korean War and the efforts to reunite these families (10,000 people were eventually reunited), a peace bell and the Bridge of Freedom where 12,000+ prisoners were released back to South Korea in 1953.  Along with these solemn reminders of the war, they have built – a carnival park. By the looks of it, there is also going to be another huge park with walkways over small ponds, picnic areas and lots more parking for future tourists. There is also a Popeye’s Chicken here. 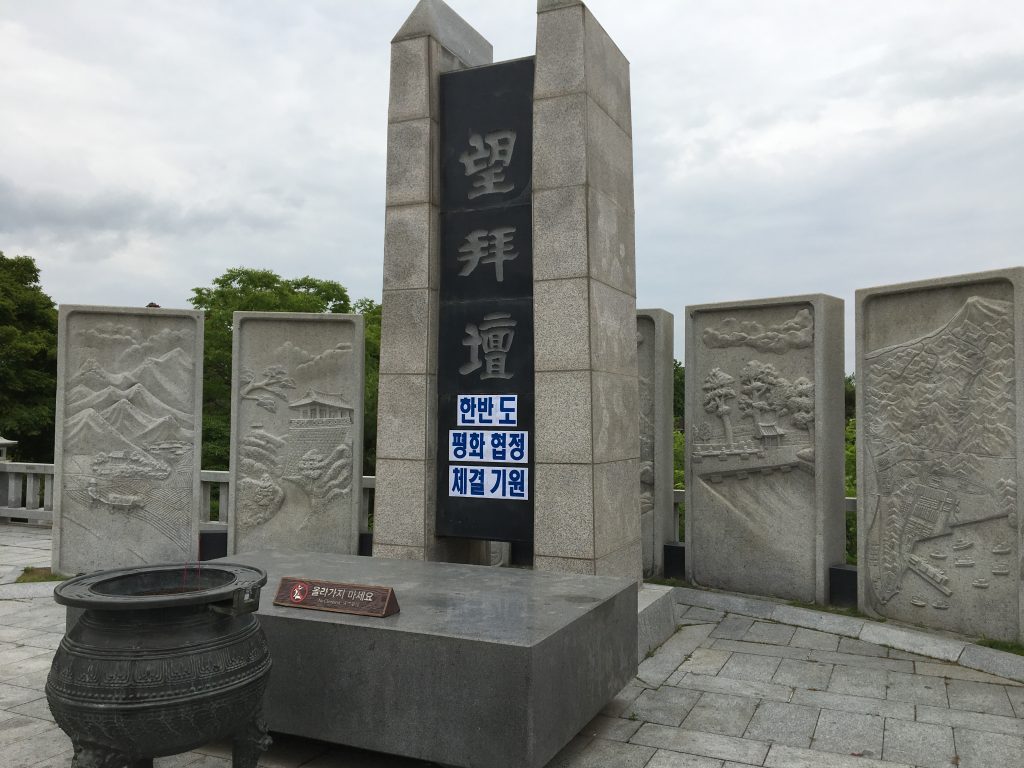 Altar for displaced people from North Korea to cherish the memory of their ancestors. They can leave food offerings and incense. 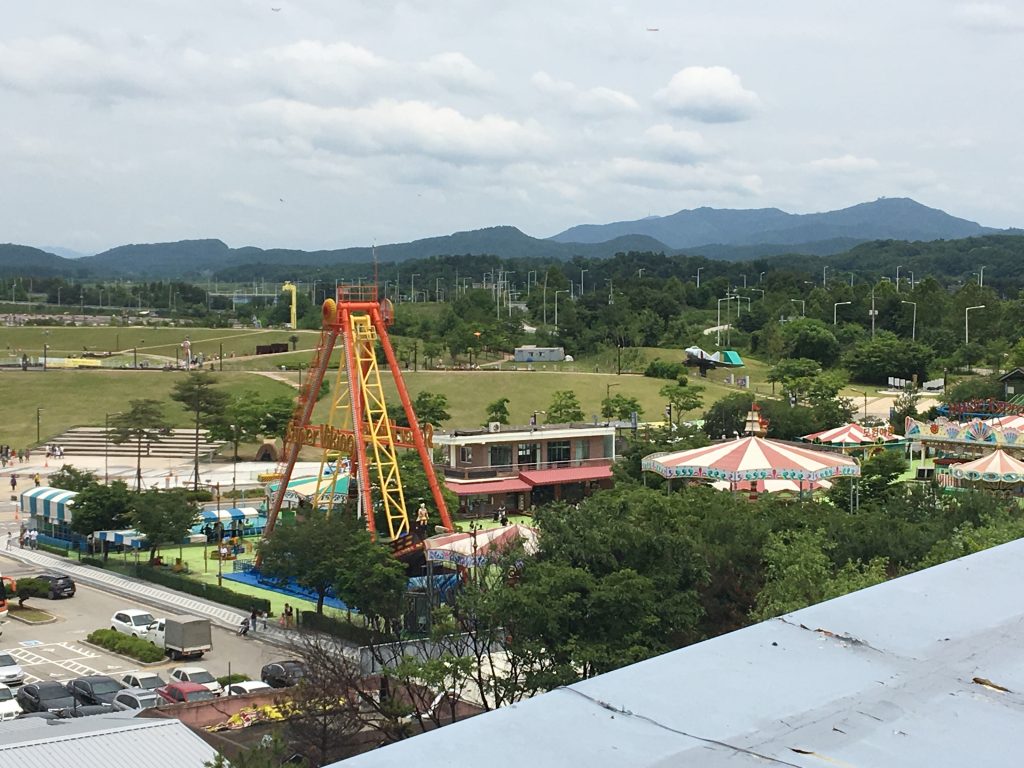 The carnival park beneath the observation tower. In the distance, people were also flying kites. 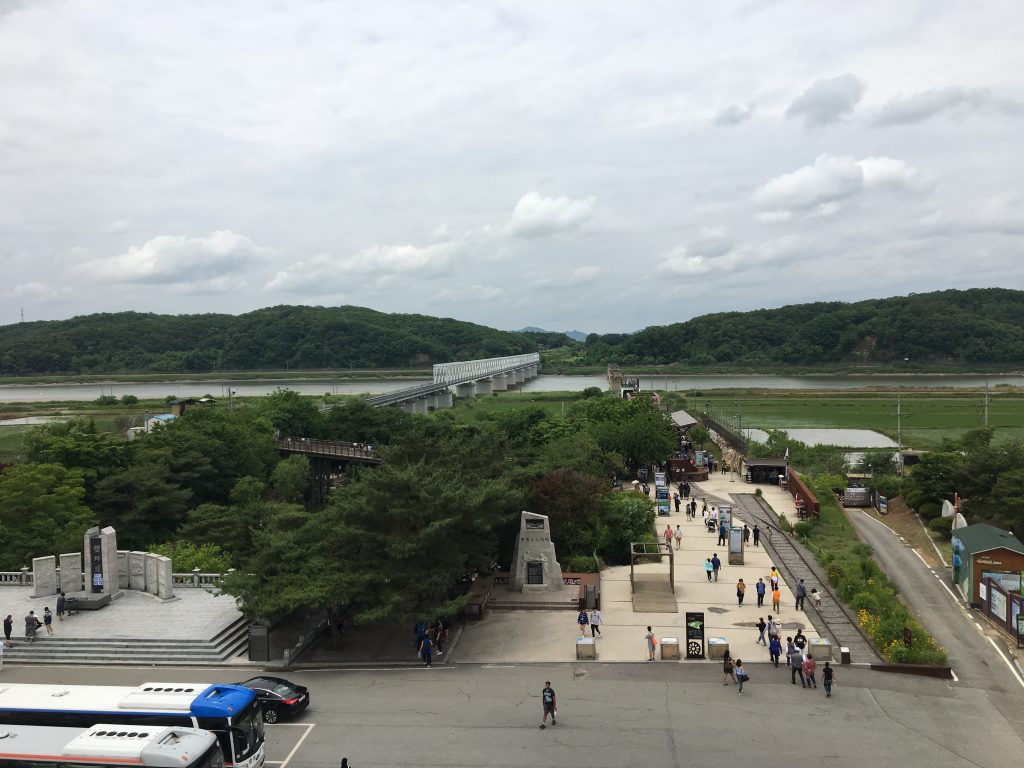 Looking northwest toward North Korea. The Freedom bridge is the wooden one, The white bridge is for the railroad into the DMZ from Seoul. 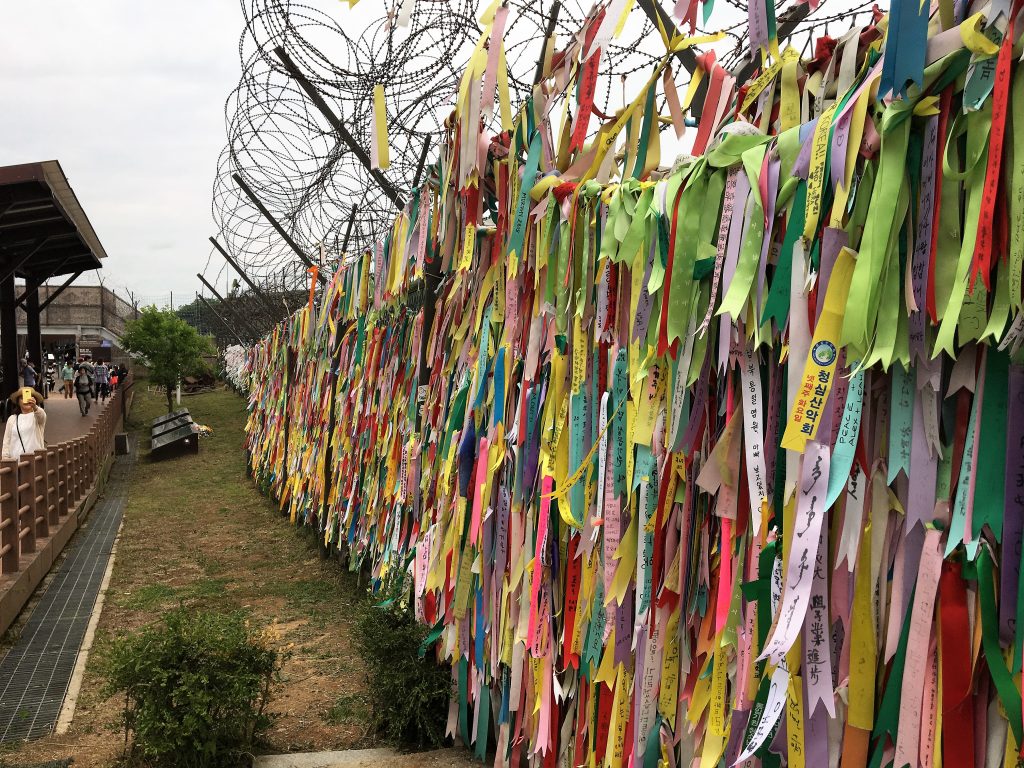 Wall of ribbon prayers for reunification of North and South Korea.

After stopping at this area for lunch and a quick look around, we got back on the bus and headed to the checkpoint. At the checkpoint a soldier got on our bus and inspected (quickly) each person’s passport. Then made some calls, filled out some paperwork and let us through.  I thought we were in the DMZ at this time, and everyone referred to it as the DMZ, but later on looking at maps in the Dora Observatory, we technically were NOT in the DMZ. Just in a very heavily monitored area along it. 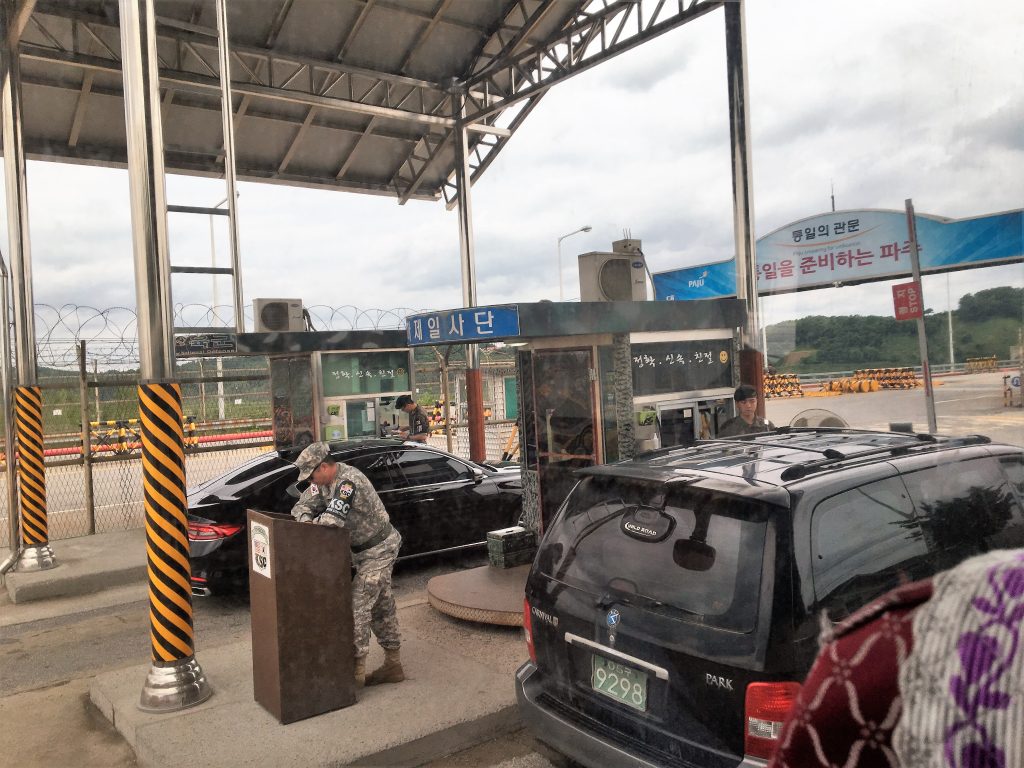 Checkpoint for entering the restricted zone next to the DMZ.

Our next stop was the Third Tunnel. Since 1971, 4 tunnels have been found that were made by the North Koreans in an effort to be able to infiltrate South Korea, potentially with troops or spies. The third tunnel was found in 1978 and it is estimated that 30,000 North Korean troops could pass through it in an hour into South Korea.

The tunnel is now open to visitors, but we were not allowed to take pictures. In the visitor’s center there were some good models of the JSA and DMZ and we watched a movie about the tunnels and where they were found.

After the movie, we donned hardhats and made our way down a steep (11% grade) tunnel into the smaller 2 m wide/2 m high passageway.  At the end of the passageway, about 70 meters before the demarcation line, the tunnel is blocked off by three barriers erected by South Korea. At one time this was guarded, but the threat of someone coming through the tunnel has decreased enough that it is not guarded anymore. The hike back up the 11% slope was a nice workout for the middle of the day. 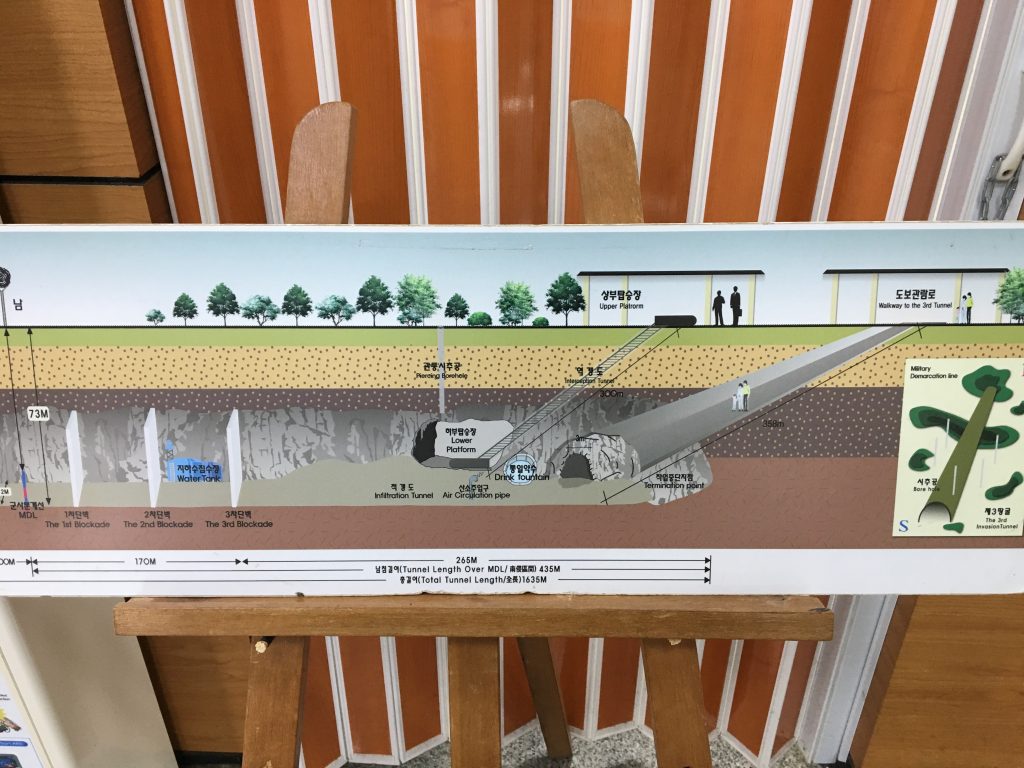 Schematics of the 3rd Tunnel. 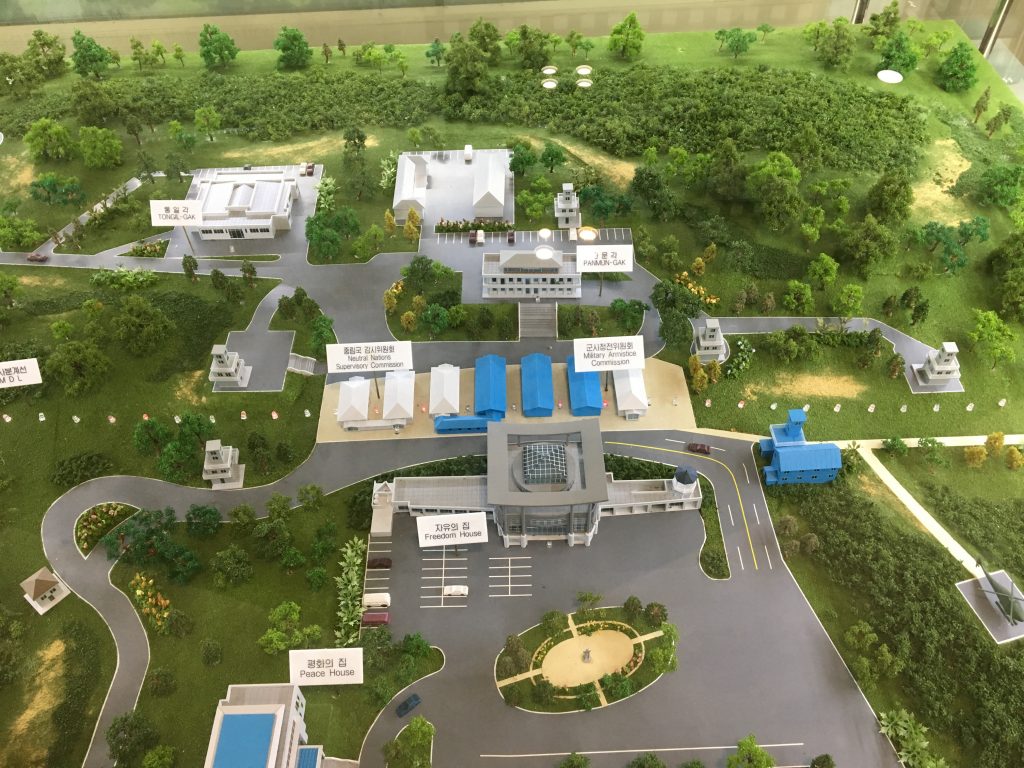 Model of the Joint Security Area where diplomats meet at the border. 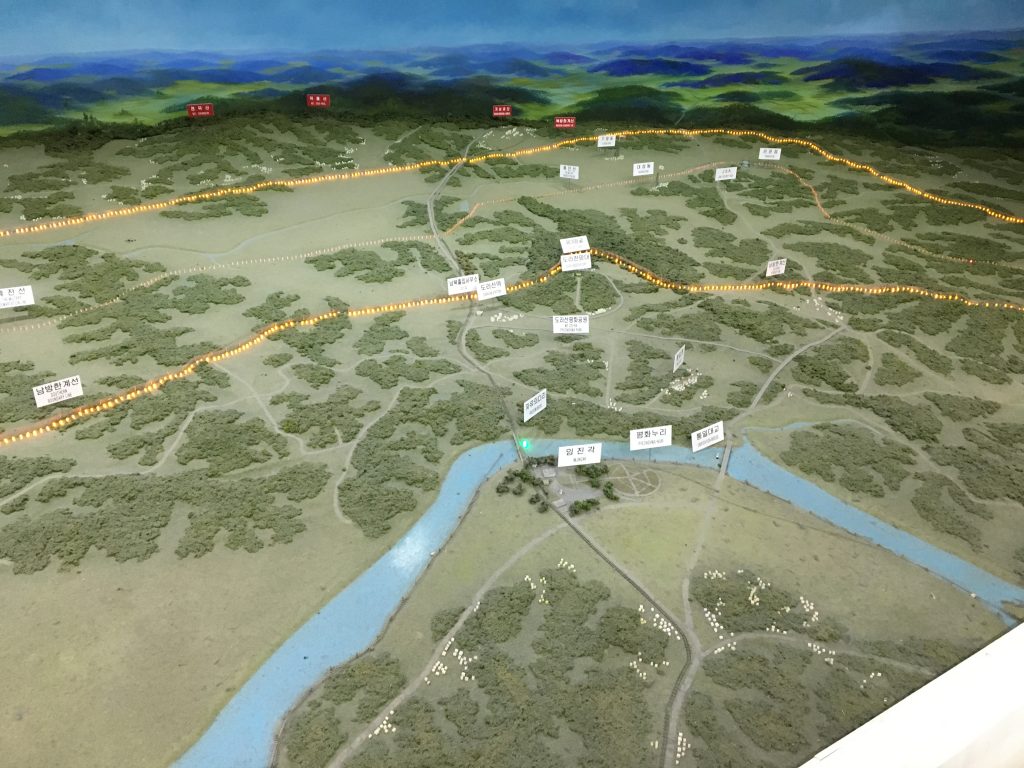 Model of the DMZ area, with borders lit up. We were just south near the Dora Observatory, which we visited later. (just above center of the pic) 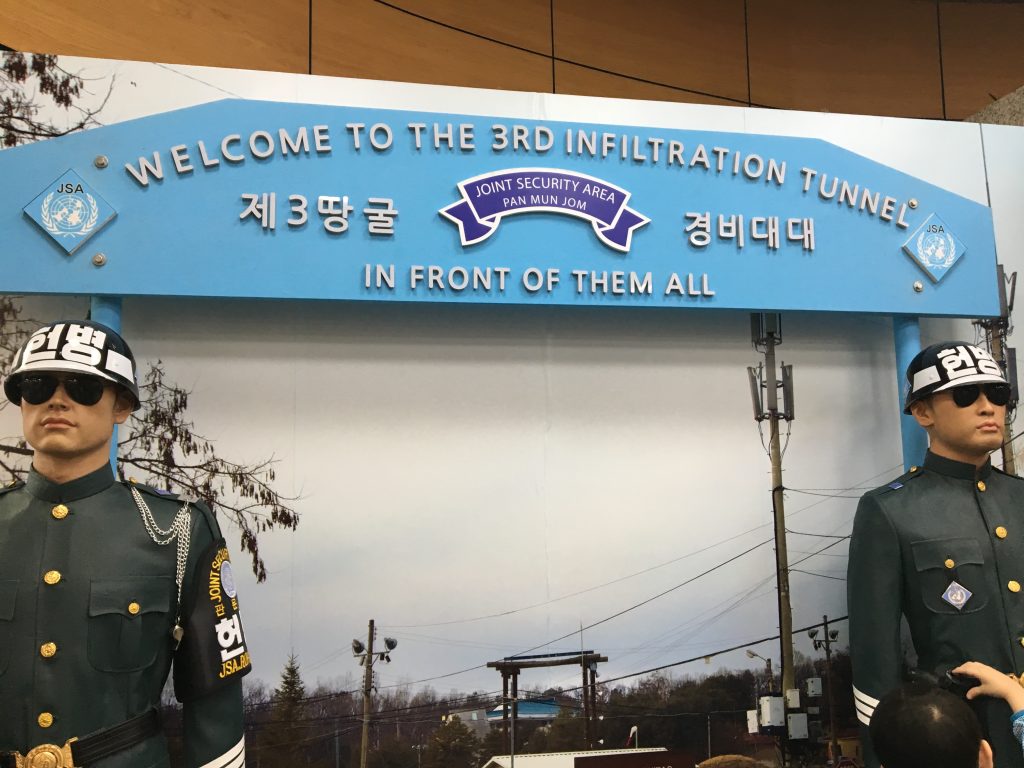 In my opinion, the best stop of the day was the Dora Observatory. It’s basically a lookout towards North Korea. From here, there are telescopes and I could clearly see a few people walking around one of the “villages” near the flagpole and in a few fields.

In the 1980’s South Korea put up a respectable flagpole (323 ft) near one of their “peace villages”. The North Korean government countered with a flapole 525 ft tall. This flagpole is next to a village that has since been proven to be completely fake. It has concrete-faced buildings painted blue with no windows or even rooms. No one lives there but the caretakers, but it gives the illusion of plenty and comfort of the North Korean people.

Along with the fake village, there is a smaller city to the west. It looked like no one was there, as there was no smoke, steam, cars or any sign of movement. We were pretty far away, but our guide said it was one of the clearest days he’s seen this spring. 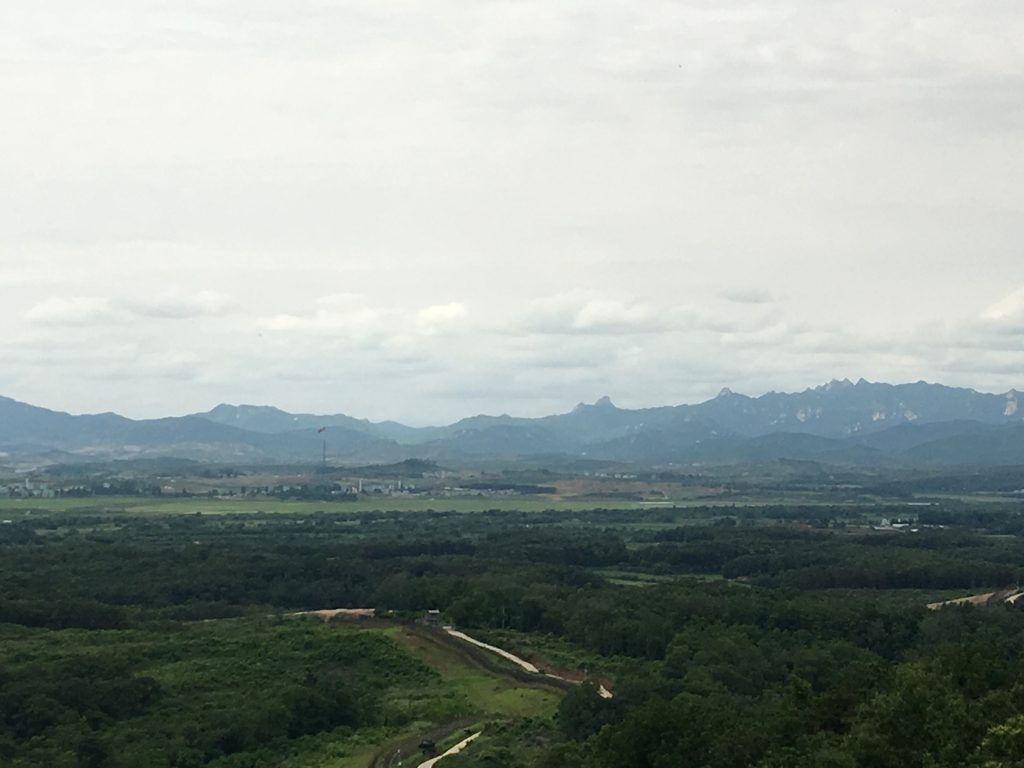 The North Korean flagpole (just left of center), and the village around it. You really need a telescope to see it clearly. 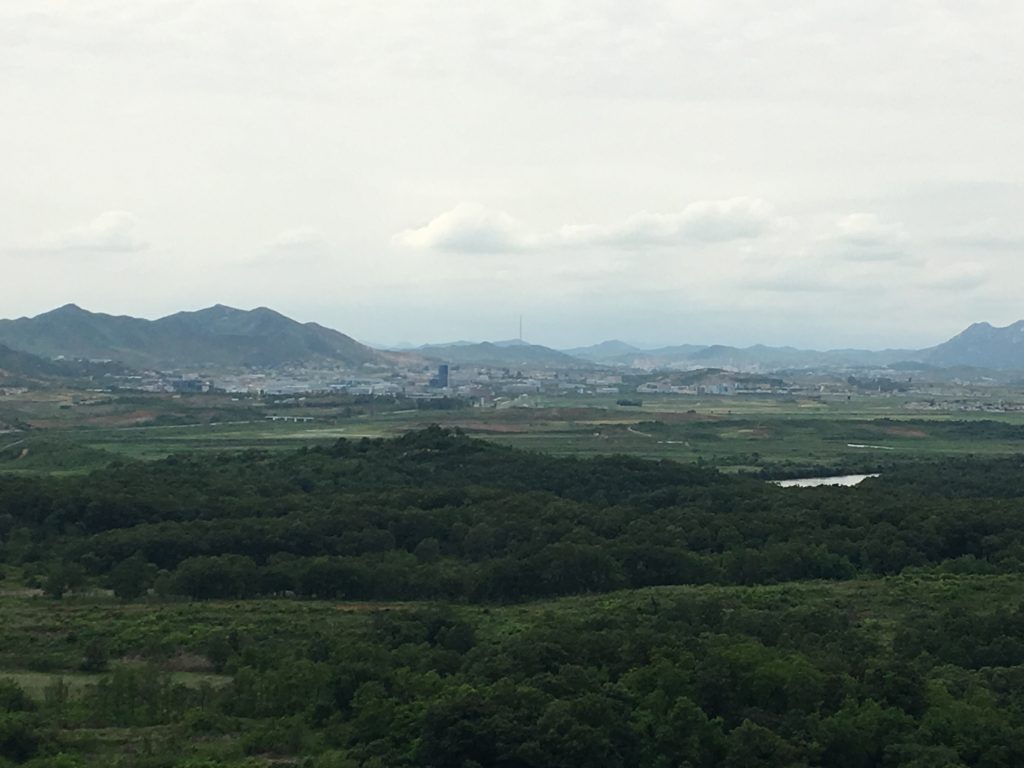 This is a city just west of the flagpole. It is called Kaesong. The black building is the Kaesong industrial complex. Our guide said it has been closed down (not sure why).

Our last stop of the tour was relatively pointless, but I guess the South Koreans wanted to show it off. It is the last railway station before entering the DMZ. Evidently, people can take a train from Seoul up to visit all the sights we saw near the DMZ. I’m not sure if I understood it correctly, but our guide seemed to also say that if Korea is ever reunified, this would be the primary point for incoming people from North Korea. However, he said it was not large enough to handle the expected crowds and that other venues might be needed. Right now it is a large, empty station with one train a day to and from Seoul. 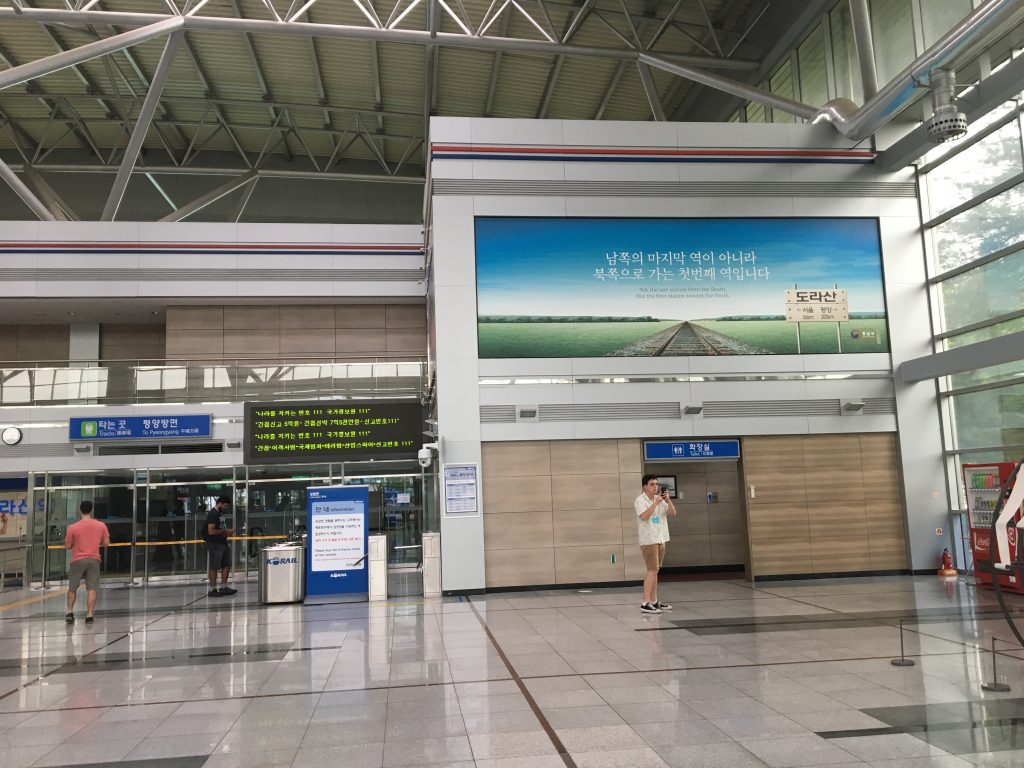 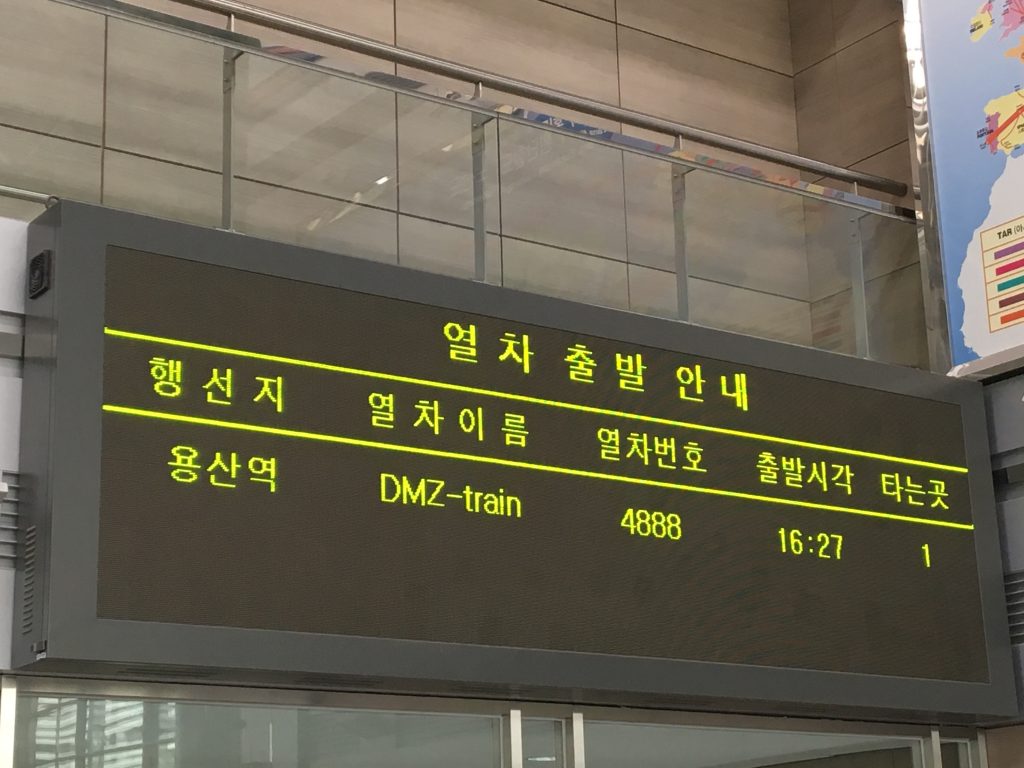 The train back from Dorasan Station to Seoul.

All in all it was an interesting day. I am glad I got to learn more about the Korean War and the horrible atrocities that befell the Korean people during the 3 years of war. The South Koreans seem to think that reunification is the answer and it might happen soon. There are reunification flags and posters around Seoul in conjunction with the meetings and summit that have happened (between N & S leaders) and are going to happen (between N & US leaders). But I wouldn’t hold my breath.