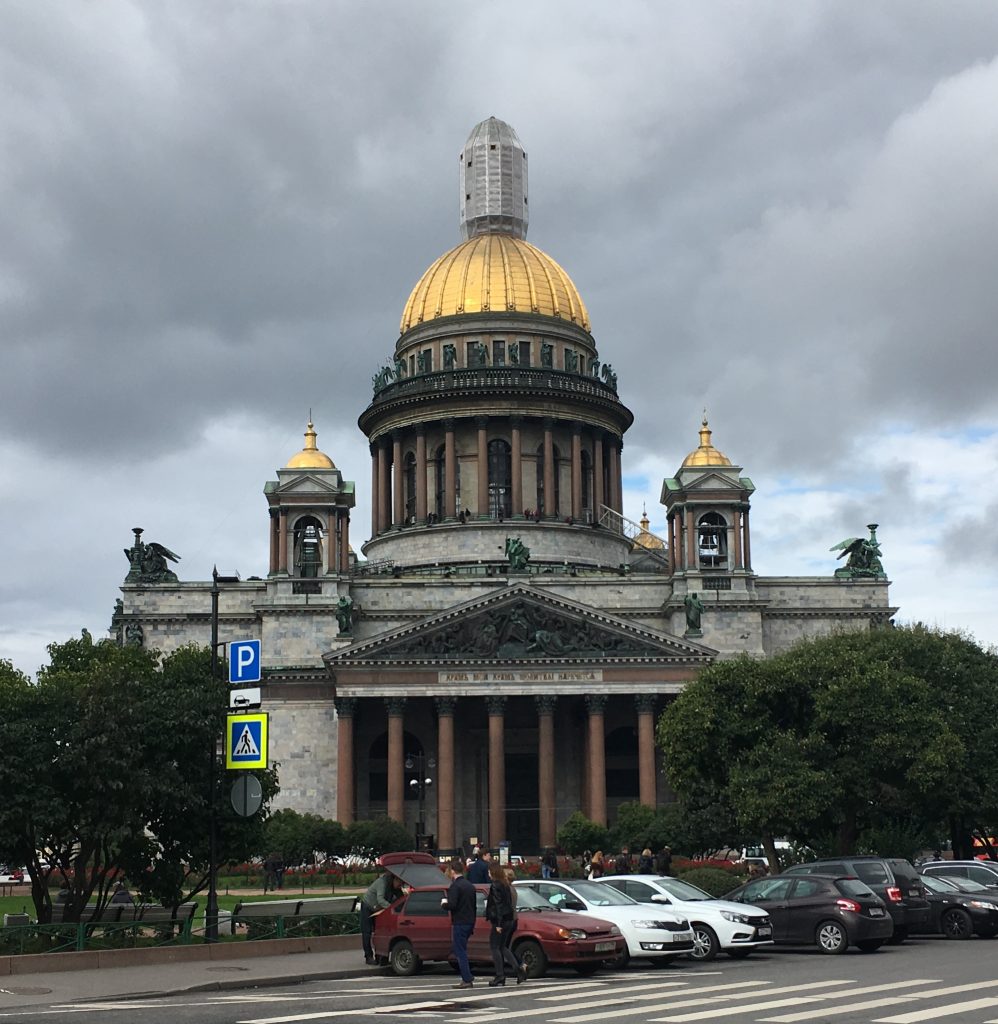 St. Isaac’s Cathedral, a church in St. Petersburg, Russia, is the third largest domed cathedral in the world. It was ordered by Tsar Alexander I in 1818, and after being built for 40 years by Auguste Montferrand, it was finished in 1858. It has a height of 102 meters and an interior space designed to hold 14,000 standing worshipers. The building has so much gold, marble, and heavy statues that it has compacted the foundation and sunk into the ground.

The exterior holds 112 eighteen meter red granite pillars and weighing in at 64 tons apiece. At the top of the building sits a 25 m diameter dome with a total of 100 kg of solid gold gilding. This dome is surrounded by four large domed bell towers, two of which you can take stairs up to walk around the colonnade. At the base of the dome are 24 life sized statues of angels designed by Josef Hermann. Down at the entrance to the cathedral, there are large 15 foot tall iron doors that weigh ten tons each and have small carvings of Tzars on them. 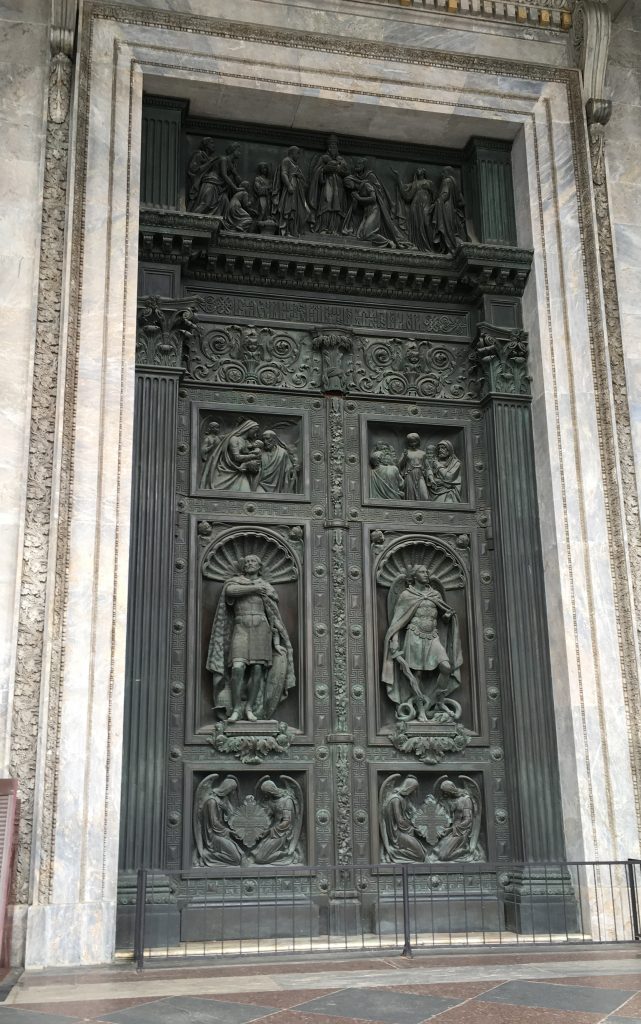 When I first walked into the cathedral, I was amazed by the amount of gold, art, marble, and other things that filled the cathedral. On the inside of the aforementioned dome, there were gilt statues that were slightly tilted inward of twelve angels looking down on the people in the rotunda. At the top of the dome was a painting of a dove with a 9 foot wingspan. At the front of the altar, there were giant gilded doors where the priest would stand and there were large lapis lazuli and malachite pillars. All around the church, there were Russian mosaics which are different from other mosaics in their method of creation. Russian mosaics have a rougher look while Italian mosaics are smooth to the point that they can look like a painting. 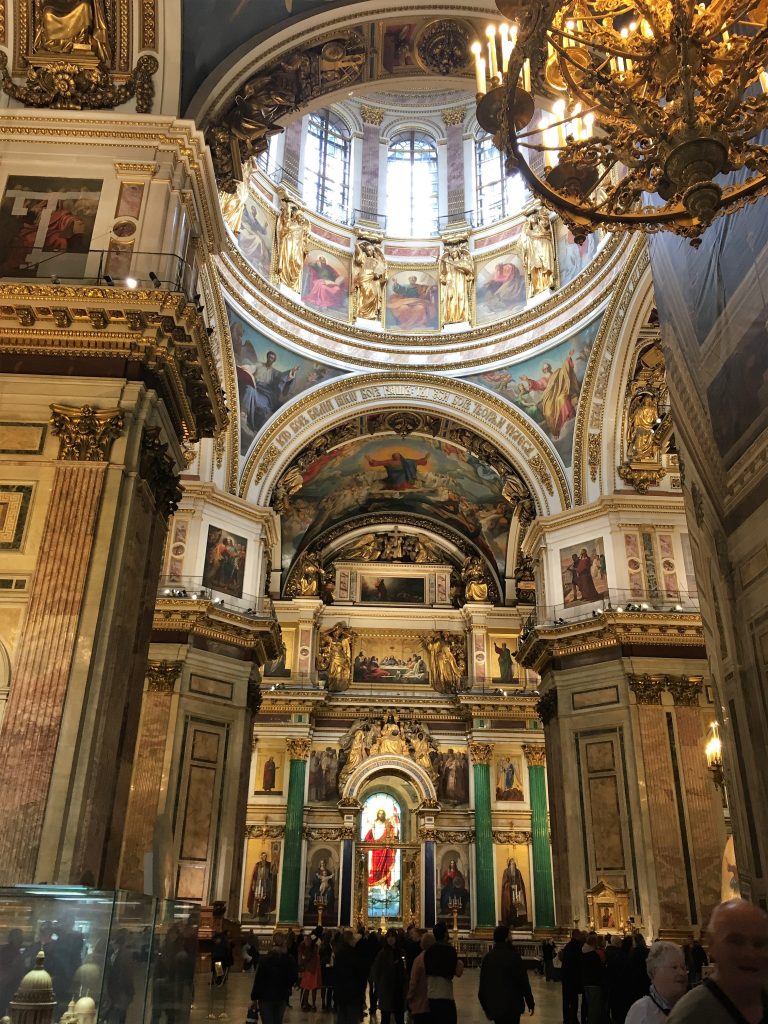 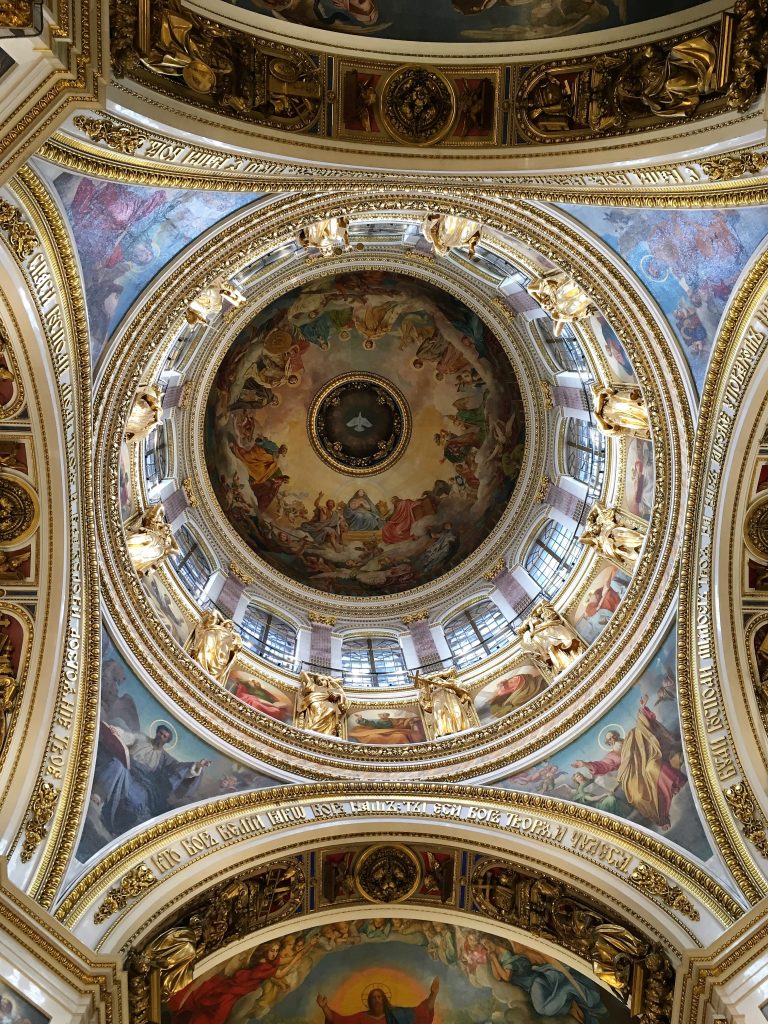 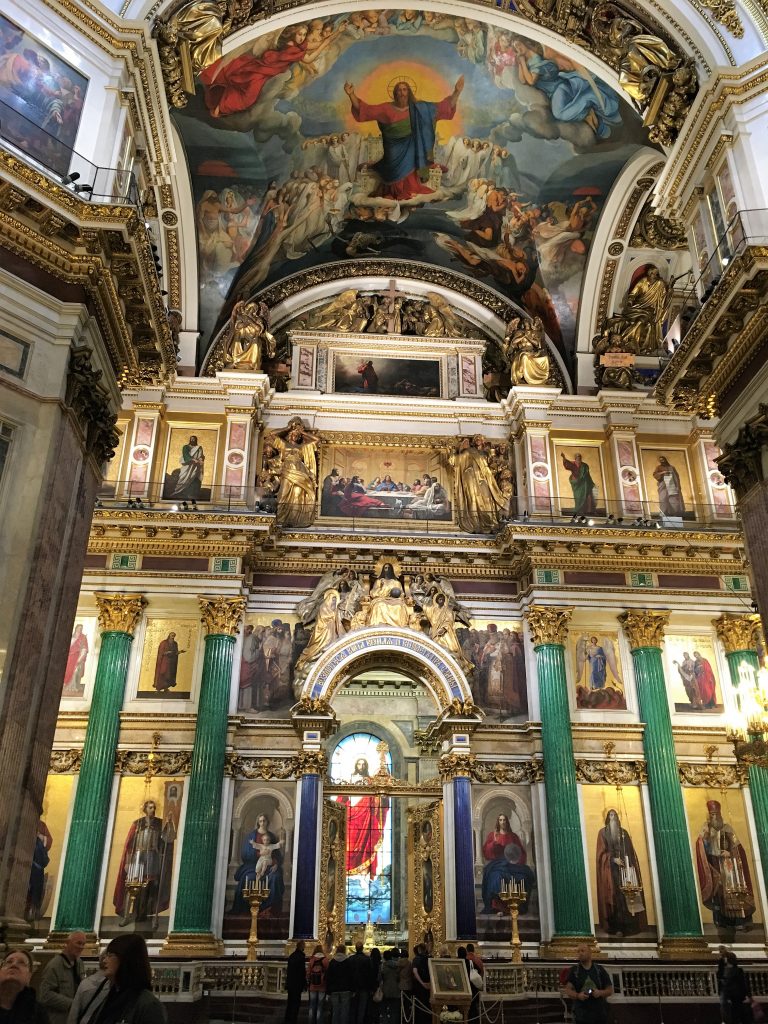 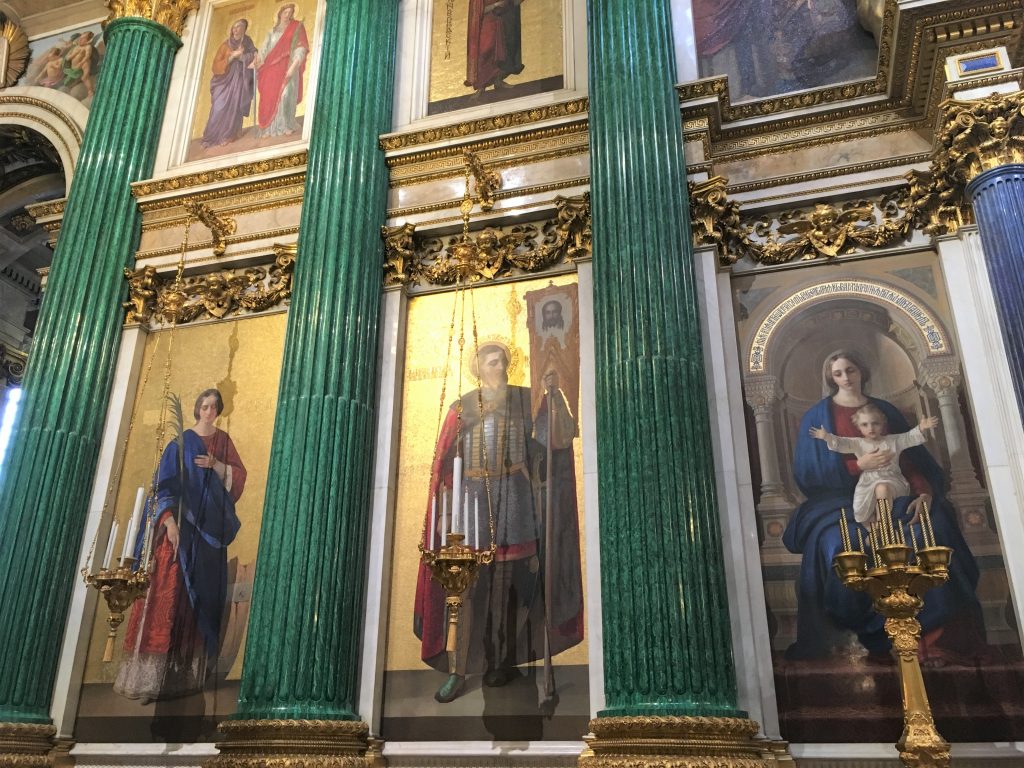 Near the entrance to the church was another entrance to stairs in the bell tower that lead up to the walkway around the dome on the exterior of the church, called the colonnade.  In total the number of stairs is 262 which is roughly only 100 less than the Statue of Liberty. At the top, you can walk around the entire dome and get beautiful scenic views of the whole city of St. Petersburg from 43 m in the air. 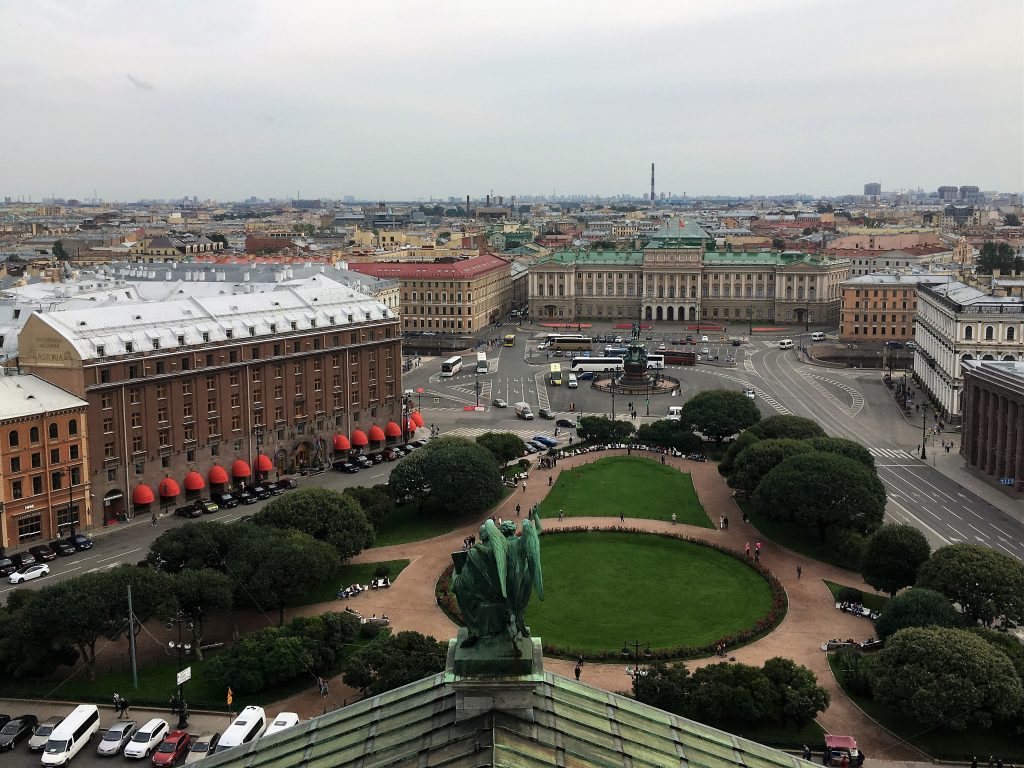 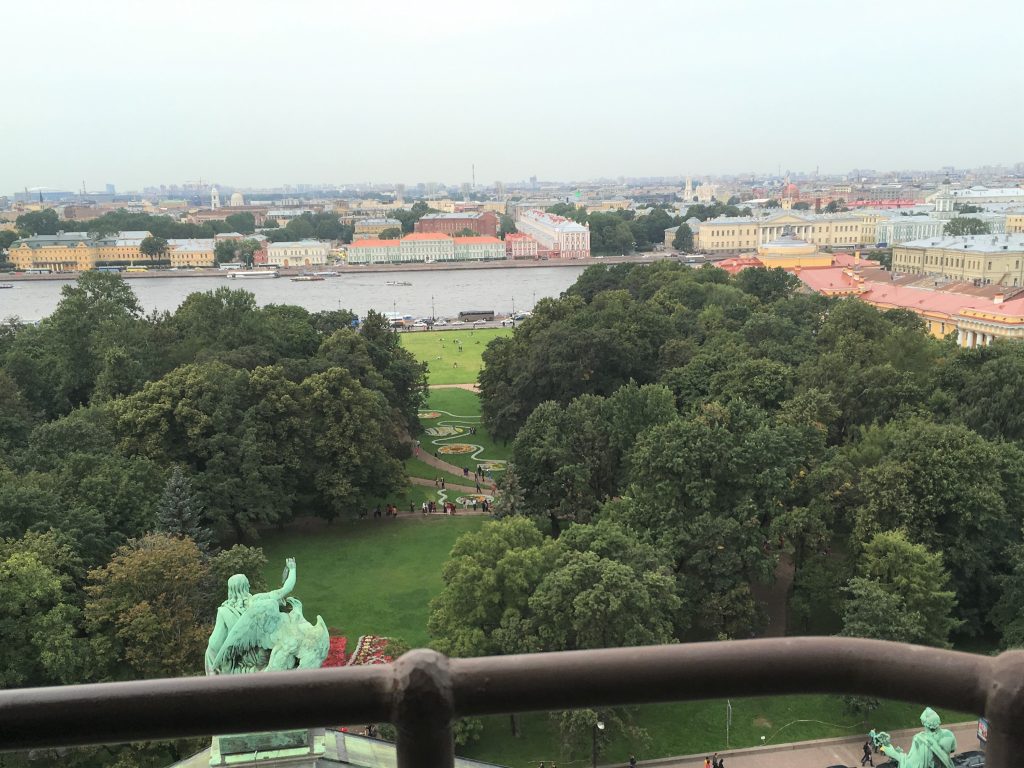 Overall, between the interior art, the beautiful exterior, and the top walkway, the cathedral is a great place to go if you’re in St Petersburg. 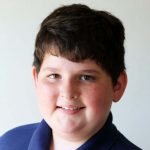