Our family has visited both the east and west coast Disney theme parks in America, the Disneyland Paris theme parks and now we’ve visited the Tokyo Disneyland park.  I must say it was So. Much. Fun.

That’s not saying that the rides are better or the layout is better. In fact, we were disappointed when we headed straight for Space Mountain only to find that it was closed for maintenance.  Bummer. It’s probably our favorite ride of every Disney park.   But – what sets the Tokyo Disneyland apart from the others, in my opinion, is the people watching!  And the Merchandise!

So, in order to not make this post super long, I’m going to divide it into a few posts.

Tokyo Disneyland is a “hometown” kind of place. That is to say, there are not a lot of foreigners there. I would say that probably 90% of the people we saw were Japanese. I feel pretty confident about this for reasons I will give shortly. Anyway, we saw some Caucasian families throughout the day  – Australian, Russian, and American. There were also very few Indian families. The other Asian populations were represented, with mostly Korean and very few Chinese (surprisingly, but I guess they have their own Shanghai Disneyland so they don’t visit Tokyo’s).

So how do I know they were Japanese? The giveaway was the clothes they wore. 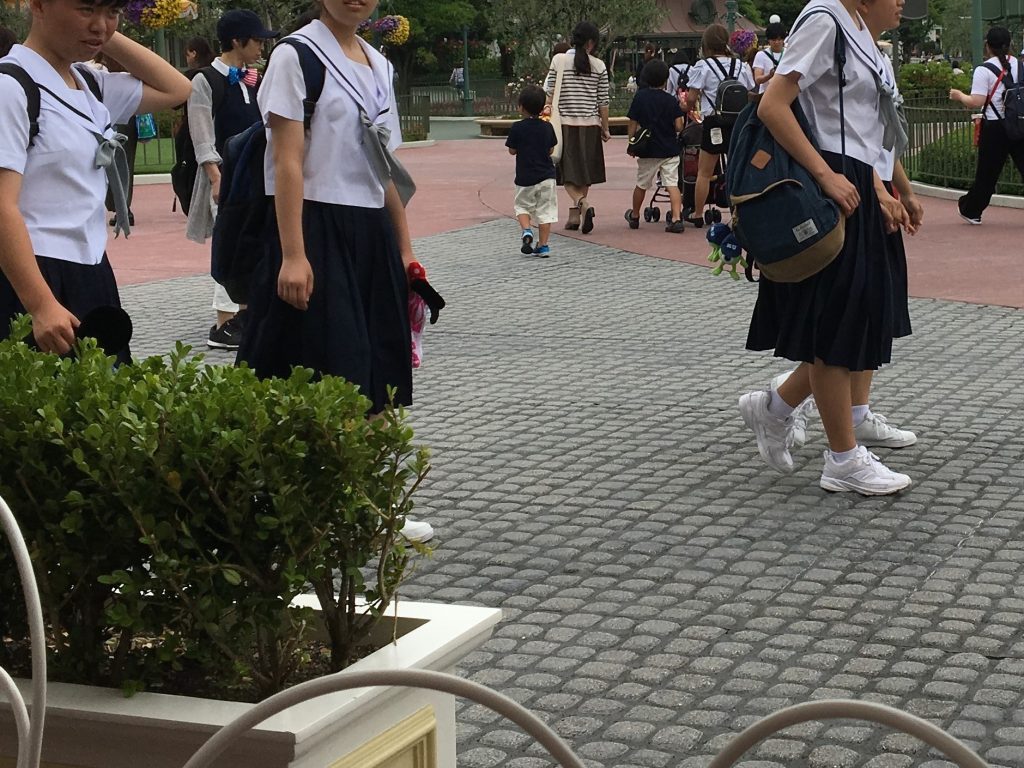 I’ve cropped out the heads of these school girls, but you can see the uniforms.

There were huge numbers of Japanese schoolkids visiting. Their uniforms were almost all the same. They were all required to wear white, flawlessly ironed, starched shirts, and either blue pants for the boys or blue/plaid skirts for the girls. Some girls’ shirts were actually sailor tops, which made me thing of Sailor Moon all day, but every girl and boy had pretty much this exact outfit. We are talking probably thousands of kids there today.

The other people were all wearing the same things as well. When I say “the same things” I mean there were couples, groups, and families who had on identical matching Disney branded tops, semi-cosplay outfits, or exactly matching ensembles with each other. Every group had matching headgear – meaning Disney ears, hats or wraps (we’ll talk more about that in the merchandising post), socks and sometimes shoes, or at least the style of shoe. 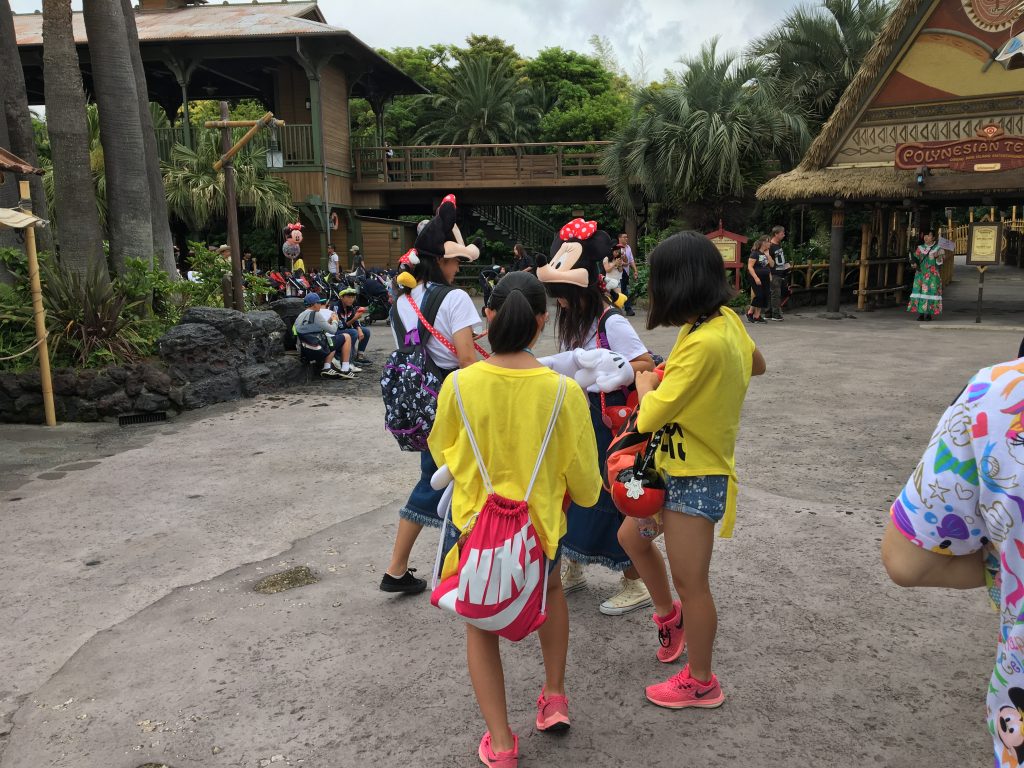 So imagine you’re a teen or twenty-something and going to go to Disneyland with your friends. You have to coordinate that you are all going to wear the black and white striped shirts, the super-loose black wraparound pants, white socks and high platform sandals that you ALL bought at some point to prepare for this day. Then, when you get to the park, you have to all buy the same headgear (101 Dalmatian puppy ears were a big thing) so that you all look like cute little puppies all day. IMHO that’s exhausting, but I’m sure if I were 20 years younger it would be really fun. 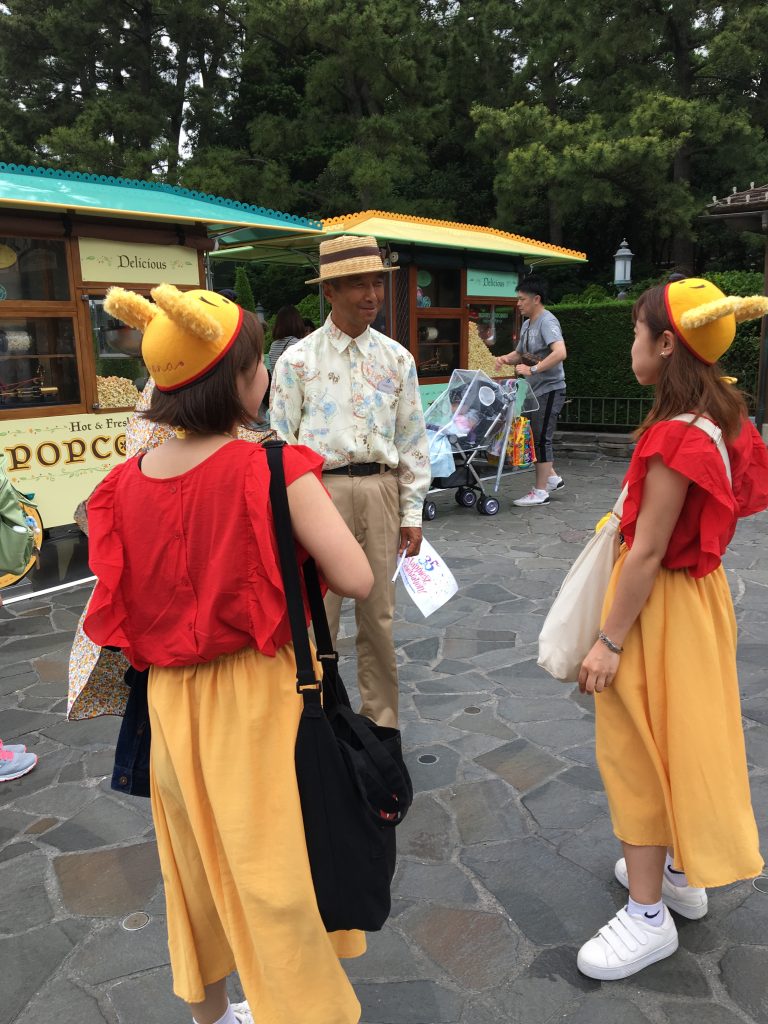 Two girls in Winnie the Pooh semi-cosplay outfits talking to a cast member. 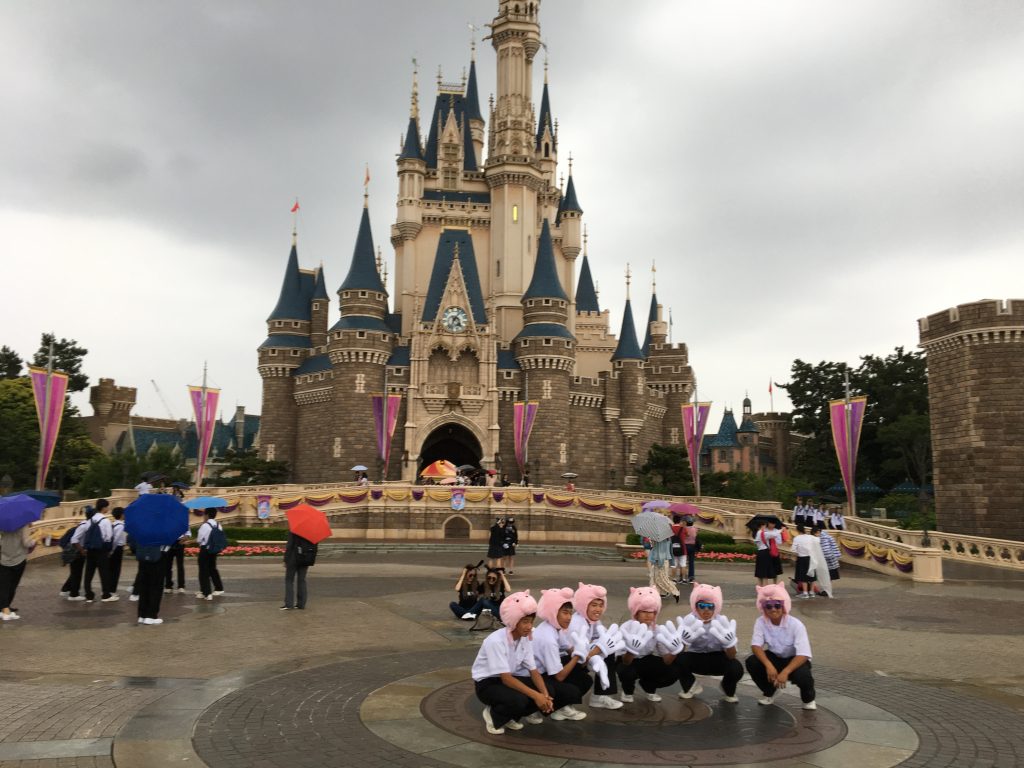 These guys were having a great time with a camera man in front of the castle.

It was great fun to check out all the matching outfits of people. I saw people with the same t-shirts and it wasn’t always Disney (but usually it was). There were the IKEA girls, the Chucky girls (from the horror films), the guitar t couple and on and on. 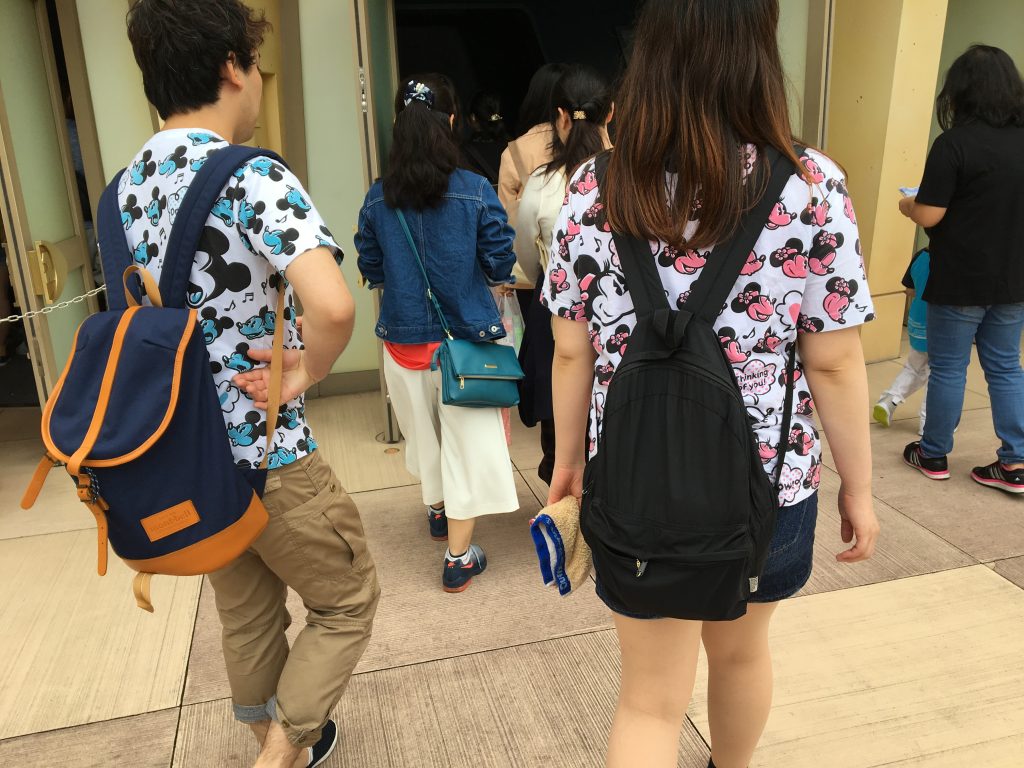 Here’s one of my favorites from today: 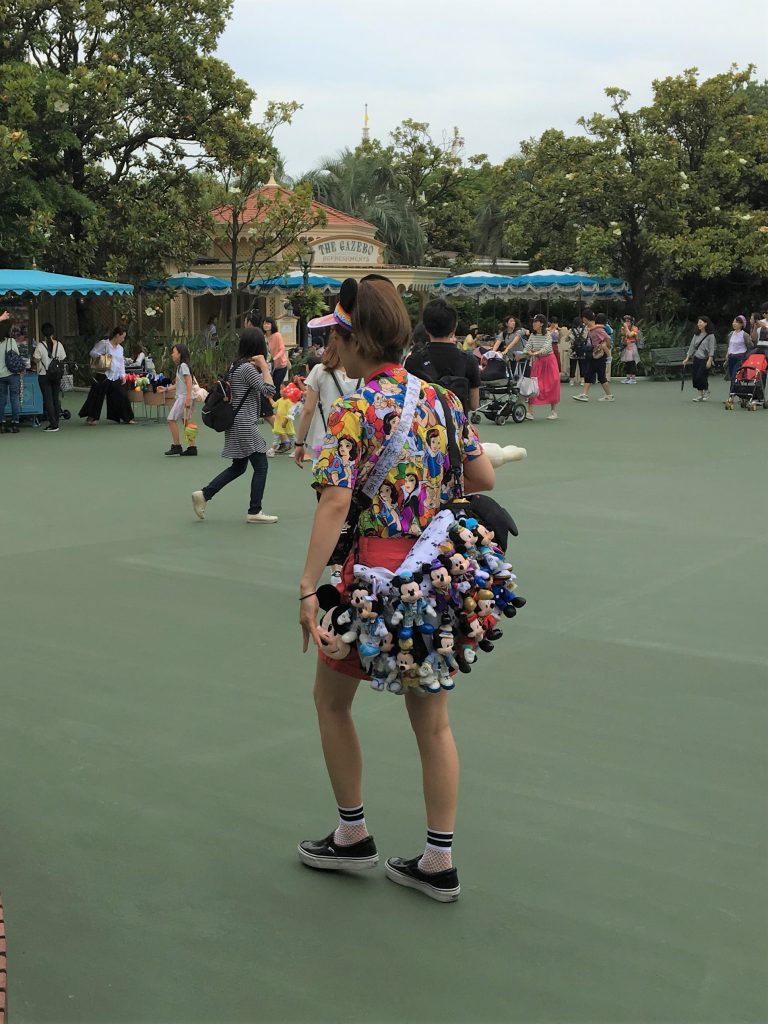 By the end of the day I was starting to think the boys and I needed to go buy the same shirt. My god, we weren’t even wearing the same COLOR!!  Luckily it started raining and we covered up so it didn’t matter.

Yes, one of the highlights was watching all the people.

Just a few observations on the cast members of Tokyo Disneyland.  I got the chance to interact with more of them on a closer level than most because I had acquired a “Guest Assistance Card” in the morning to help navigate the lines for rides. My knees (and feet) are still hurting, so waiting in line for hours was not going to happen. I took my walking stick and knee brace with me and asked if I could have a pass card for the day.  The Main Street office was extremely nice about it and gave me a card for this purpose.  They were all polite and nice as they could be to a fault. I definitely think they have that covered.  The interactions came when I had to use the card.

It wasn’t exactly a fast pass, and I still had to wait, but just not in line.  First, I had to ask an attendant near the ride if I could get a time to come back. They would rush around and try to find someone who spoke some English. Then that person would take my card, write out the name of the ride, their name and the time I could come back.  This time coincided to however long the normal wait was for the line. So, in the case of Splash Mountain there was a 50 minute wait, and I was given a time to come back 50 minutes later.  The attendant would also go over the safety requirements and make sure I could climb steps, walk, and didn’t have any heart conditions.  Then I could go sit down, walk around or whatever until it was time to go back to the ride.

Upon returning to the line, I was escorted to the front and ushered on. It was all very nice, but I only ended up using the card twice because the lines were so short in the morning, and by the afternoon I was too tired and didn’t care to ride anything in particular.

My overall impression with the cast members was that they are well-trained, somewhat easily flummoxed by a non-Japanese speaker, but always, always polite.

An interesting thing I saw a few times, but I do not think I’ve ever seen it at any other park – the cleaning crews held dance sessions on the streets.  They were the people who walk around and sweep up every little bit of debris in the park, but they were allowed to put their equipment aside and just have fun. Groups of them would gather near a store or a plaza and start to play music. They would dance, wave little flags and encourage kids to come dance (or adults) and just have fun. It was nice seeing this. 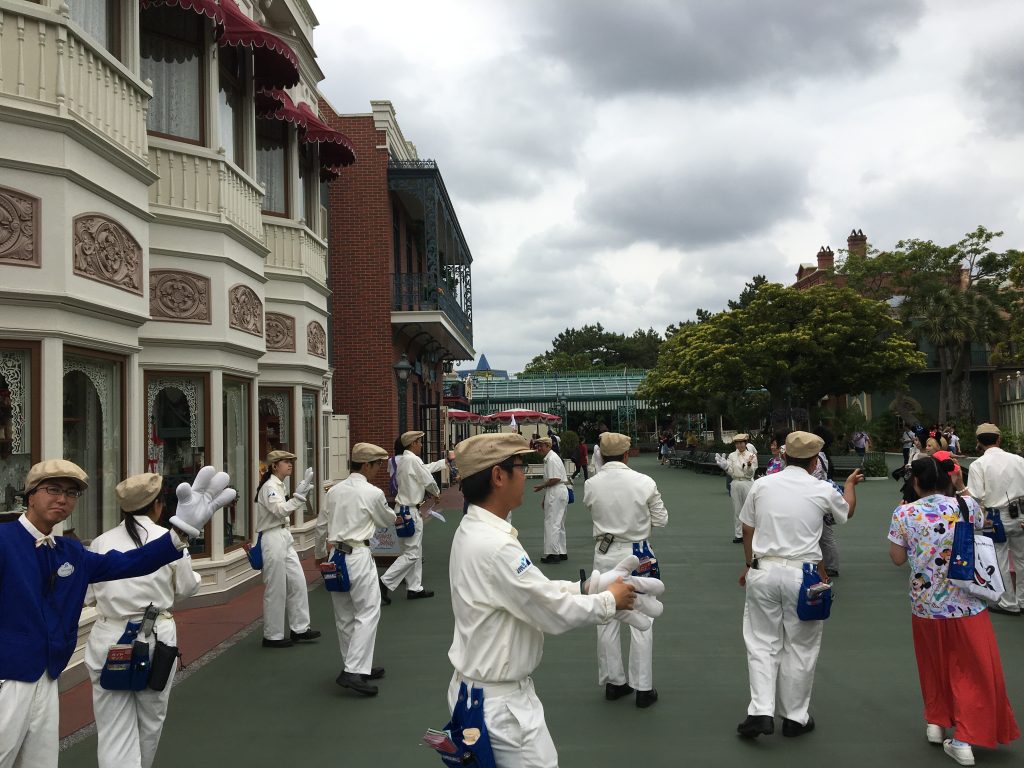