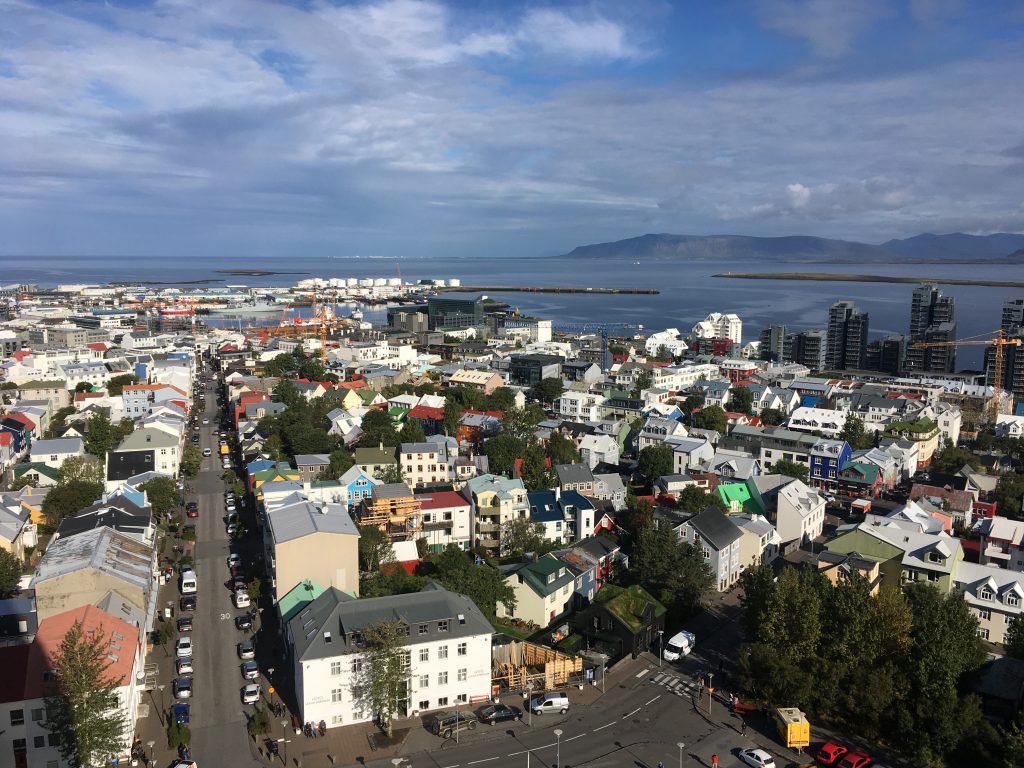 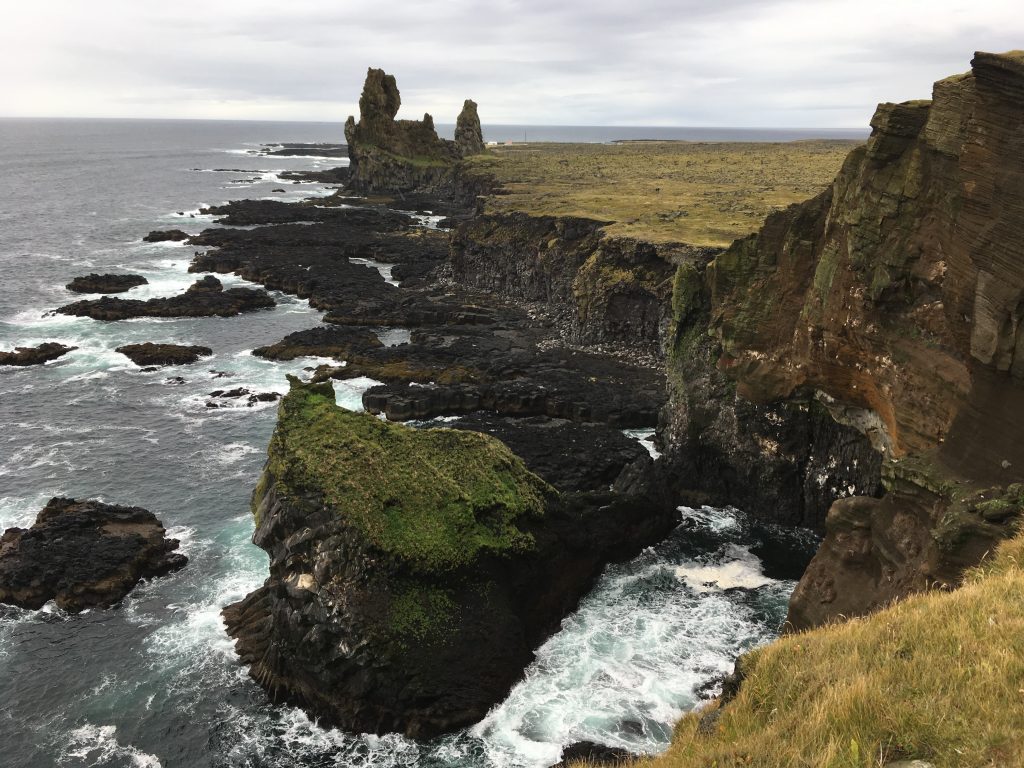 Iceland is a study in opposites.  There is the whole fire (volcanoes) and ice (glaciers) thing, but it has a huge dichotomy between Reykjavik and the rest of the country. I didn’t expect it to be so completely different. Let me try to explain…

Leaving Reykjavik our first day of touring to drive out to the Golden Circle route in the morning was a surprise to me.  There was so much traffic coming in from the suburbs.  Kilometer after kilometer of backup on the other side of the road as commuters came in droves on the two-lane highway to go to work at downtown jobs.  It reminded me of the Bay Area traffic and I was glad we were going in the direction of the “opposite commute”.  Where did all these people come from?!

After driving around Reykjavik (much more than I wanted to due to no data on my phone and only small crappy maps to read 25-letter or longer street names), I realize that Reykjavik is NOT a small town.  I was expecting it to have kind of a small town feel even though it has a large population of about 217,000 in the greater Reykjavik area. It definitely does not have that. 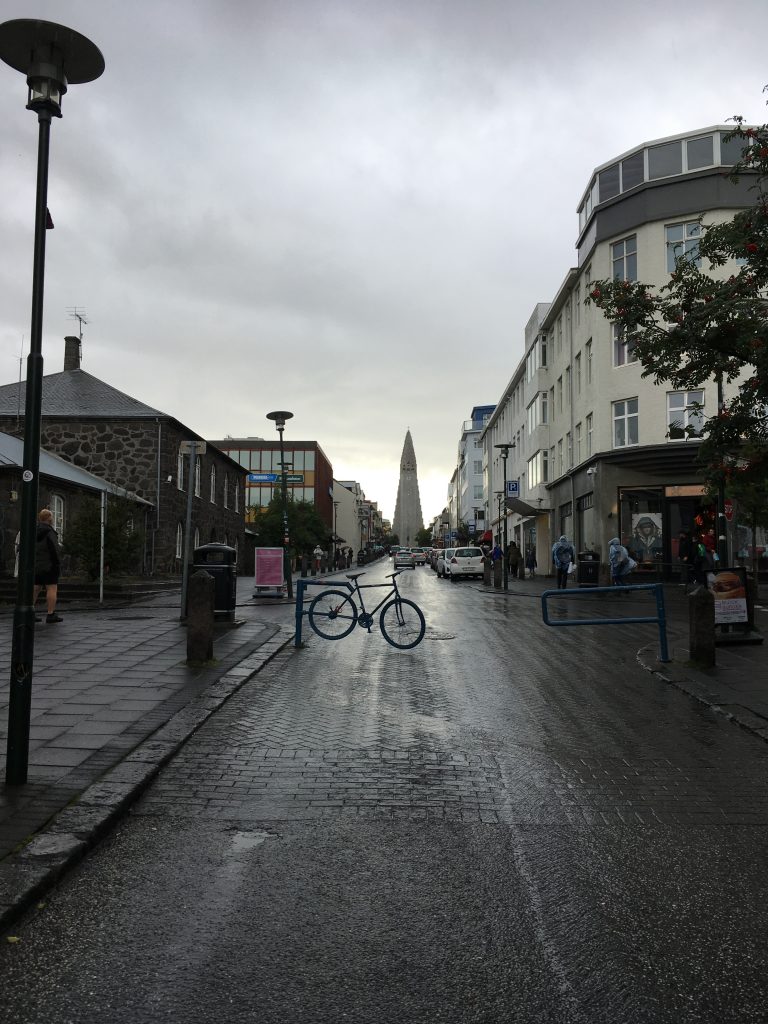 There are places where the homes are small, wooden structures with fancy carved cornices along the roof and windows, but those are few and far between after you leave the oldest part of downtown.  Most of the structures I saw were apartment buildings, 5 stories high, and so many construction cranes on the south side of the city, you’d think they were going to host the Olympics next year.

Everyone is on the move; everything seems to be being built.  The Icelandics are a busy group.  They are employed and they are productive.  There are new hotels being built at the airport, new apartments and homes being built for people to live in who support the tourist industry, and everywhere there is work on the roads, infrastructure and updating of the older buildings. I counted 6 cranes in a two block area of downtown near the old harbor.

Even the tourist sites, like Thingvellir, have cranes and new buildings going up.  Luckily, they already have buildings for toilets, as the droves of tourists who come there have no other option. The gas stations are few and far between once you are outside of Reykjavik.  Only towns with 500-1000 people or more have any sort of convenience store/gas station. 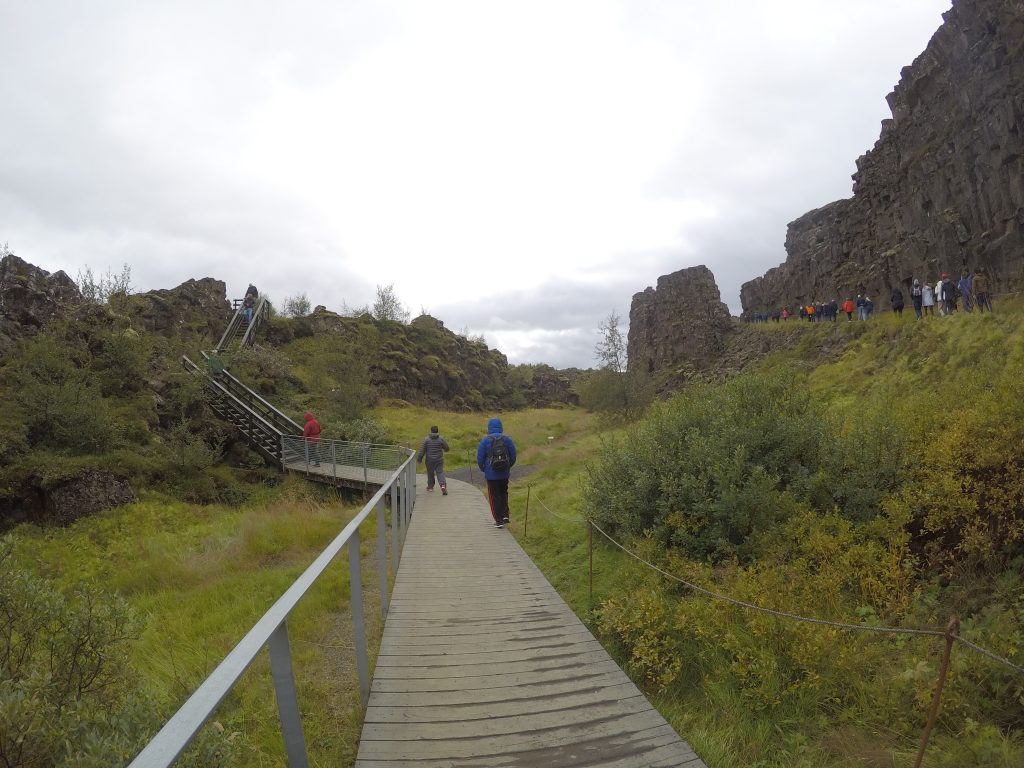 The Icelandic countryside begins quite suddenly when going towards the northern part of the island. Suddenly, you are in the suburbs with small, delightful homes perched on the hills, and two roundabouts later, you are in an area with fields of horses and ranch homes.  Going a few more kilometers down the road and all signs of humanity suddenly disappear and you are in a no-man’s-land of open countryside.  There are no trees in this part of Iceland, and few fences.  The sheep are allowed to go wherever they want.  There are no deer, rabbits or predatory animals to hunt the sheep, so farmers feel fairly safe leaving them to wander. 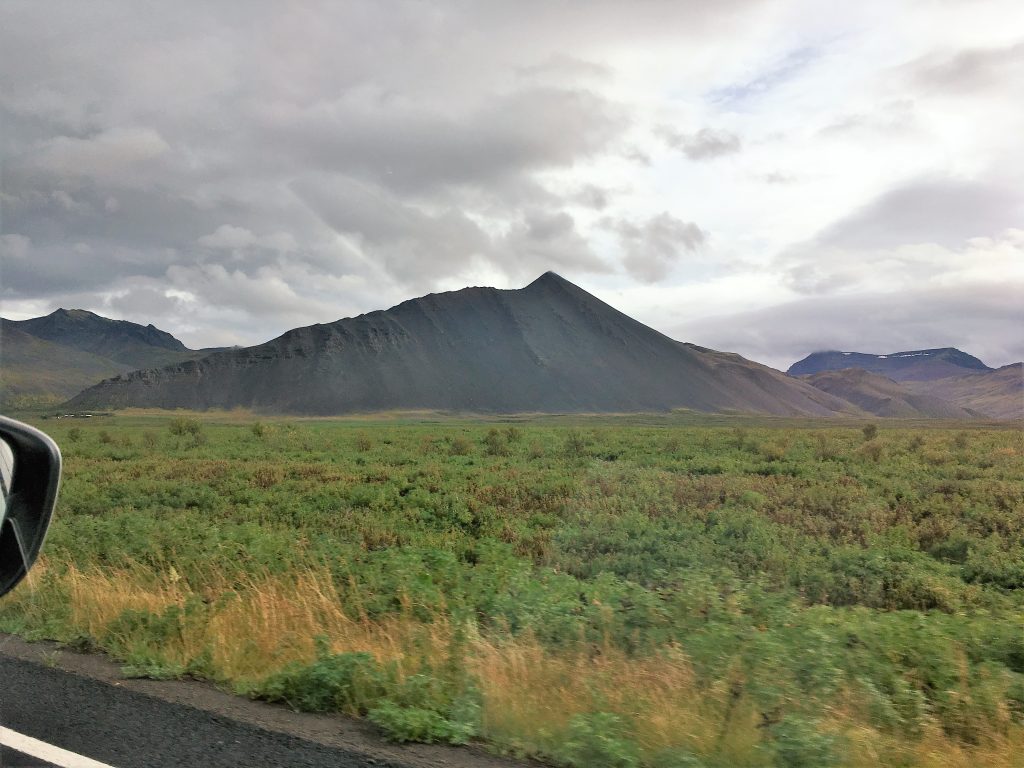 It’s calming and a bit scary.  There are endless vistas with absolutely nothing in them but huge swaths of land and volcanic cones.  The views are spectacular, but it almost looks like a scene after a plague has ravaged the earth…”Nothing was left and the earth returned to the creatures who were able to survive…” I believe it was due to the lack of trees  here that I got that feeling.  Elsewhere, while driving around the Golden Circle, Hwy 1 to Vik, and the Snaefellsnes Peninsula, there were trees (planted by farmers) and farms and although they were far apart, I did not have that foreboding sense of emptiness. It is a beautiful country, and the differences are so stark it’s hard to think about the city when you are in the country, and vice versa.

To the north along the Snaefellsnes Peninsula, the farms are set up against the towering volcanic mountains, cones and plateaus.  There are dozens of waterfalls along the route north.  The lack of trees allows one to follow the path of the water 1000 or more feet down the face of the mountain, over escarpments and into the flat plain before the ocean. 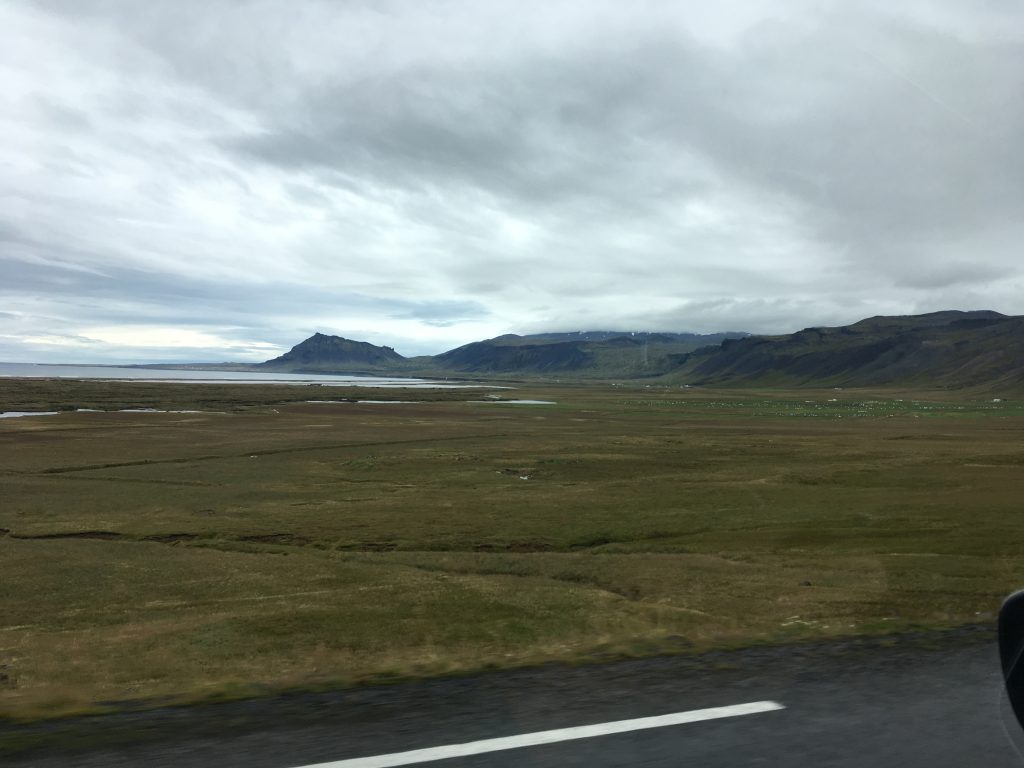 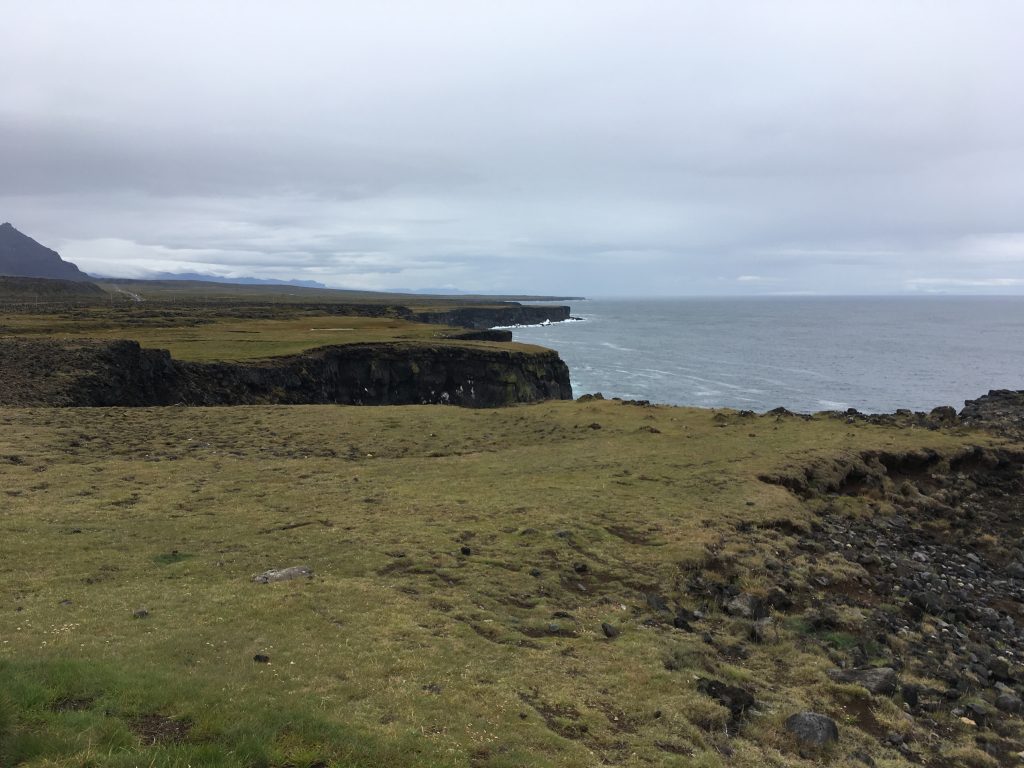 We really enjoyed the visit to Iceland.  Our highlights included the horseback riding trip at Laxnes Farm (Elijah’s favorite) and the snorkeling at Silfra (Forrest and my favorite).  It was a geologist’s heaven with so many things to see relating to geology, plate tectonics, glaciers, volcanoes, lava fields and fault zones. What an amazing classroom all contained in one country!

The Icelandics are very proud of their heritage and most can trace their lineage back 20+ generations. One clerk told us they have an app for that!  The utmost care has been taken in reconstructing their heritage sites, opening hands-on, technologically up-to-date museums and experiences for the tourist crowds. It was one of the highlights for me to see the wonderfully informative and educational exhibits at the Lava Centre on the way to Vik. Most museums are small and take only an hour or so to completely see, but they are an excellent way to learn about the history and geology of the island.

I would like to go back some day during the winter and explore the farther reaches of the eastern half of the island.  The scenery and natural wonders are waiting for me.