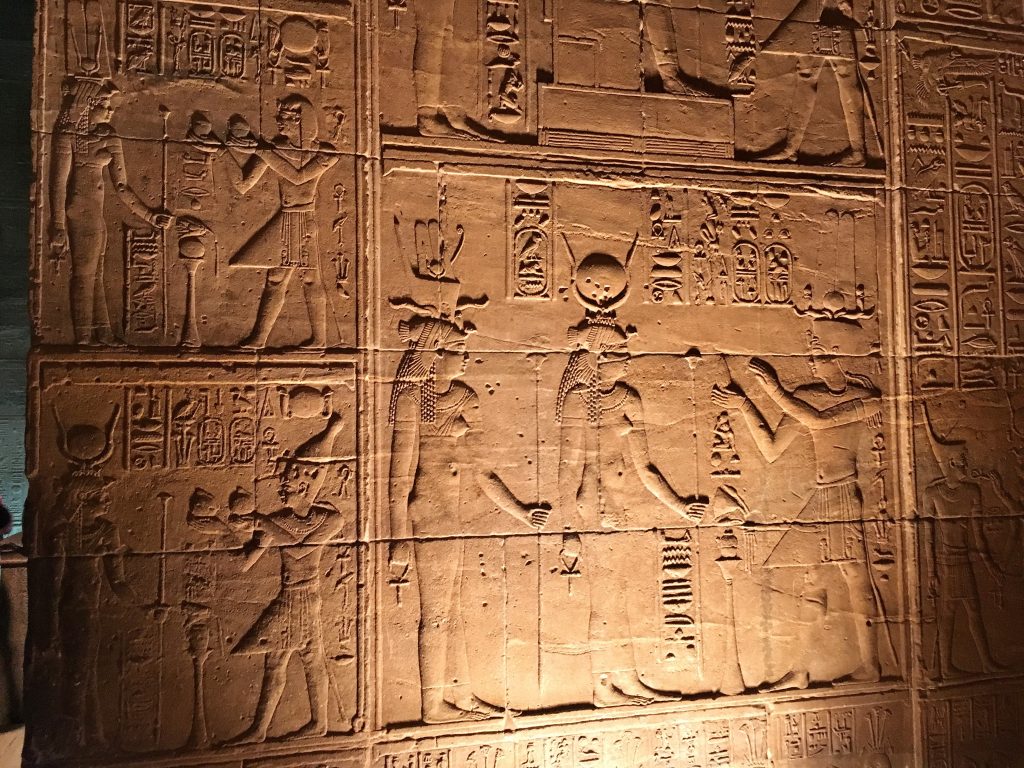 My thoughts about Egypt swirl between the magical history and the current decrepit status of this ancient country.

While the artifacts of time – the pyramids, sphinx and temples – have all been wonderful to view, the state of poverty of the citizens, general cultural differences towards visitors, and the insane amounts of trash everywhere have dampened any enthusiasm for being here. My observations are not meant as critiques to the people, but often confusion as to how things got this way, and wonderment at why someone or something is not trying to change it. I have been told that the government is corrupt and has not aided in the rehabilitation of the country into the modern era. I’m sure the same is true for many other countries in Africa. It’s just sad that this country with such a rich history has fallen into such disrepair. 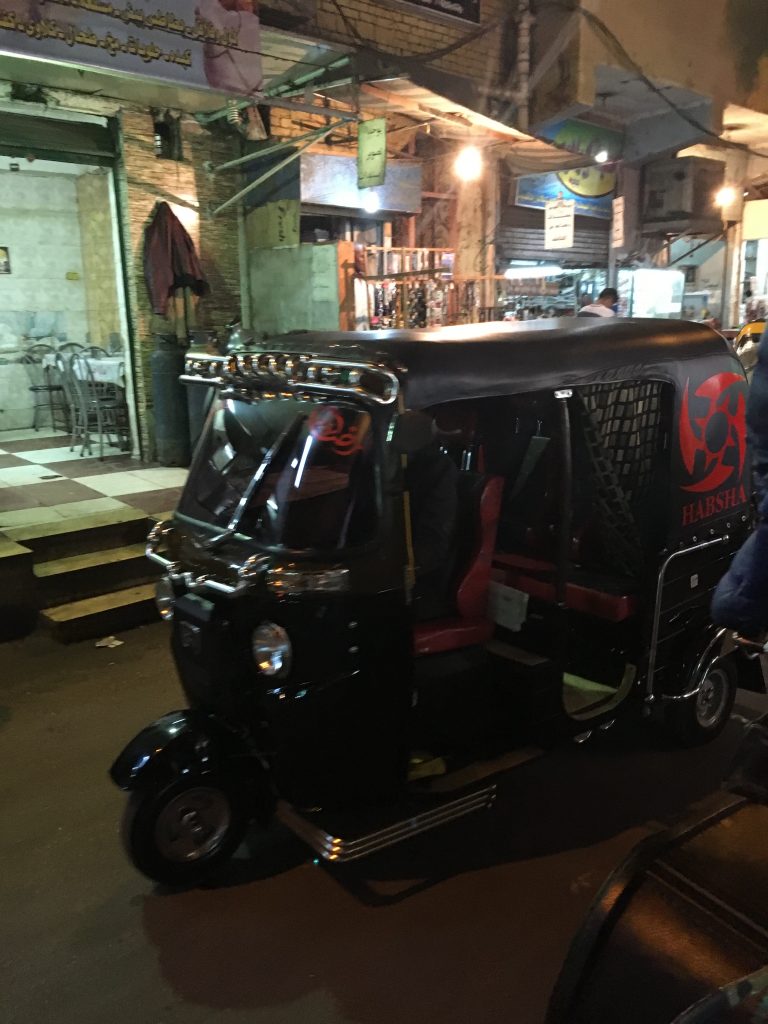 A tuk-tuk on the back streets of Aswan.

As you exit from the airport, the first thing you notice is the traffic. There is always traffic. There is no specific set of lines on any of the roads. In fact, I think because there is never a way to close the roads to draw lines and if they actually did, no one would obey them anyway. Cars, trucks, minibuses, motorcycles, horses and donkey carts as well as people WALKING and CROSSING on the highways are common. On our way from the airport to the hotel, we passed an accident where a man had been crossing the freeway (roughly 4 lanes across) and was hit. I had no idea what had happened until we drove past. His lifeless body was still lying next to divider with blood pooled around the head. It’s an image of Egypt that I will never forget.

People commonly use white minibuses independently owned and operated to go from place to place. Like a bus-taxi. Driving here takes courage, guts and some skill to push your way through the insane traffic. Drivers do not use lanes, as I’ve mentioned, but form their own columns of cars, constantly changing lanes, merging and exiting with a continual beeping of horns. Turn signals are not used, as horns proclaim your intentions much more quickly and loudly to the other drivers that you are moving in a direction and they should be aware of it.

Often, cars are so close that you could easily have conversations with other drivers next to you (not that this is common, but you could). Also, as you can easily see into the car, it is freaky to see 2-5 year olds sitting on the lap of the driver (NOT passenger – but yes, the DRIVER). Drivers have some sort of instinct after years of maneuvering on the roads to be able to predict the actions of the drivers in front of them and seem to know when to swerve, hit the brakes, or suddenly push on the gas to get into another lane. The constant fender bender threat does not seem to deter anyone.

Every type of vehicle is allowed on the highways (or main arteries that we would consider highways). Horse carts are a common sight in the lanes closest to the walls of the freeway. Buses let people on and off next to the walls, and on workdays a dozen or more people stand along the walls waiting for a ride on either a large bus or minibus. Many minibuses do not have doors, and often on the larger buses people stand hanging halfway out of the doorway to jump on or off quickly if the bus driver slows down enough. Refreshment stands along the side of the highways offer beverages and snacks to buy while waiting for your bus.

Huge potholes, mounds of dirt, bricks and debris, speed bumps and other assorted hazards all cause the drivers to constantly slow down and maneuver around on the main freeways and surface streets. An elevated freeway circling Cairo and Giza did not have these level of hazards, but I assume it is because this road does not have as many on or off ramps as the more crowded central freeways in and out of the city. You can get up to almost 50 miles an hour on these roads because of the lack of obstructions!

On the surface streets, it does not get much better. Most roads in the slum areas are not paved, and tuk-tuks, bicycles, cars, and minibuses vie for road space with horses, carts, camels and donkeys. Especially in the area around the Giza Plateau where the tourist-loving camel and horse wranglers live with their animals in narrow alleys and courtyards. 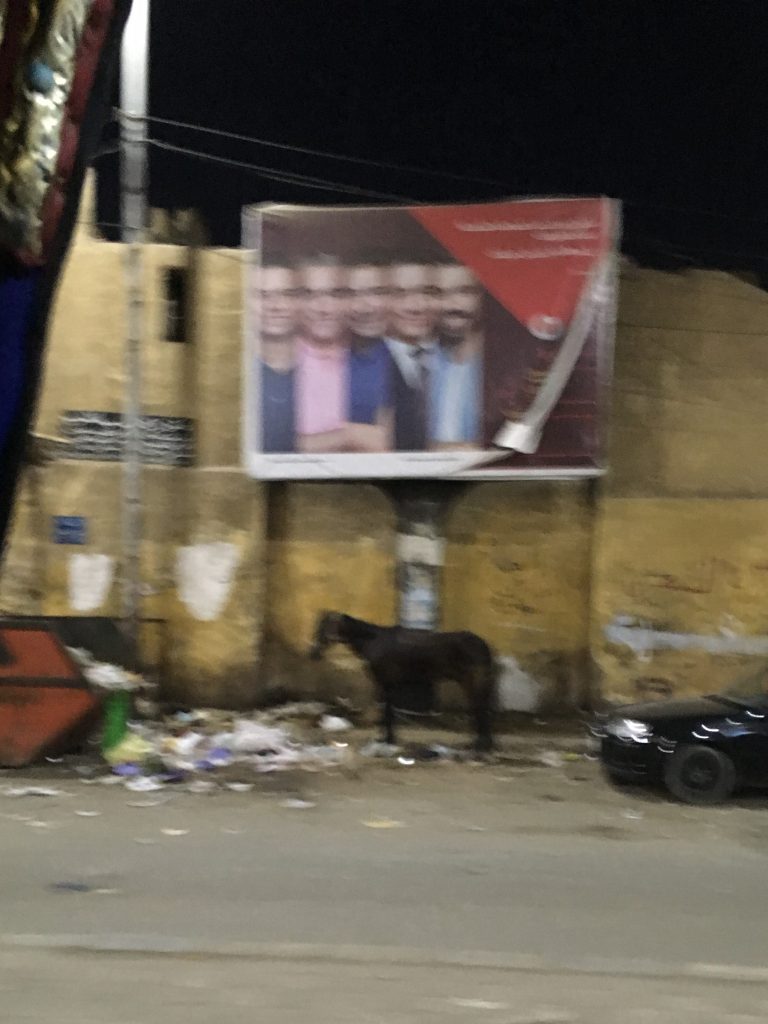 Blurry photo of a horse standing near a pile of trash beside the road.

Traffic can be at a standstill for a long time, as rush hour starts around 2pm and lasts until 9pm. Getting anywhere in the area of Cairo or Giza takes usually an hour. I would compare this traffic to the Bay Area, but honestly, it’s worse.  Among all this chaos are people walking, sitting, and standing among piles and piles of trash.