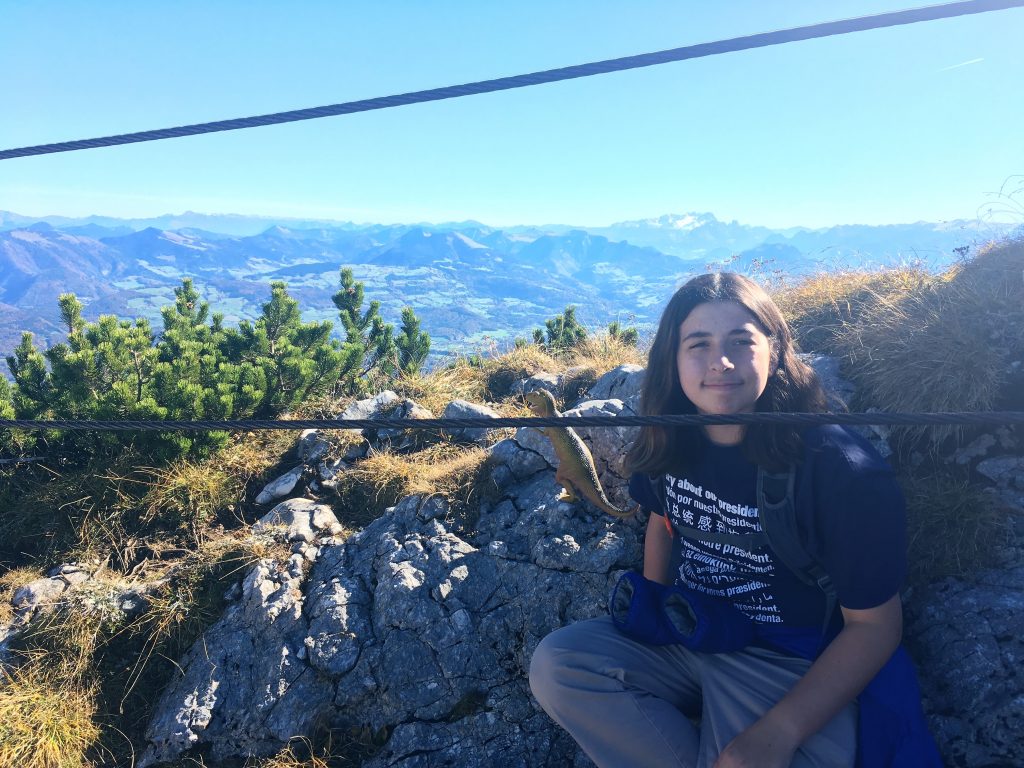 Sitting on the German/Austrian border on top of Untersberg.

Most of my friends and family know that I have homeschooled the boys since they were born. It’s hard to believe that it’s been almost 10 years of official “schooling” in the sense that the boys had “work” to do and I had some accountability to myself and our charter school.

Since we are traveling around the world this (school) year, it was not possible to remain with the charter school and therefore I filled out a PSA (public school affidavit) to be the legal teacher and administrator of the “Mora School of Academic Excellence” or whatever goofy name I called it when filling out the online form. Whatever. The CA Dept of Education is appeased and I can drag my kids on a trip around the world.

As all homeschoolers know, there are times when you have waves of doubt (usually late in the evening after thinking over how the day went) about what your kids are accomplishing (is it enough?) and what they should be accomplishing (did I write 3 page book reports in 4th grade?).  We think that for the most part our kids are doing OK until we see/hear/meet other homeschooled or public schooled kids who are doing some amazing stuff.  Then we start to second guess ourselves, often forgetting about all the amazing stuff our kids *are* doing. 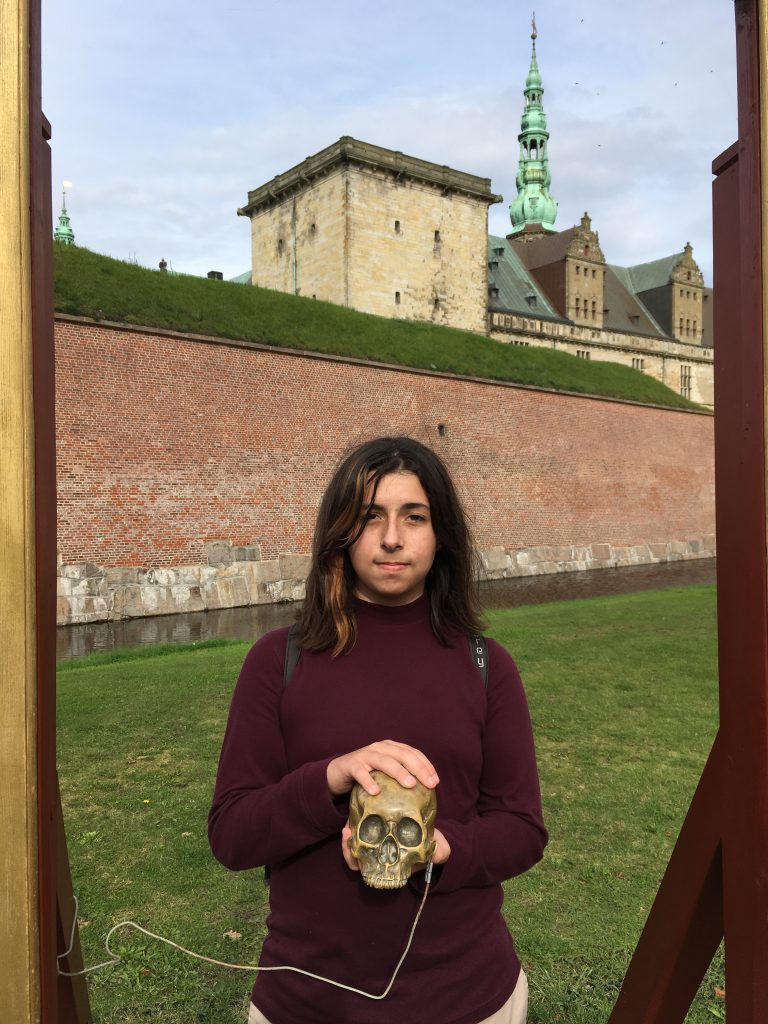 Learning about Hamlet at the castle where it was supposed to take place!

Taking this trip has added an extra level of stress about meeting the minimum requirements of education. Yes, I’m sure my kids are getting *something* out of going to all these places, and sometimes they tell me they really enjoyed the museum-of-the-day-that-I-made-them-visit (internal whoop of happiness). However, there is still the lingering, nagging thought of, “What will they have to show for this year?” 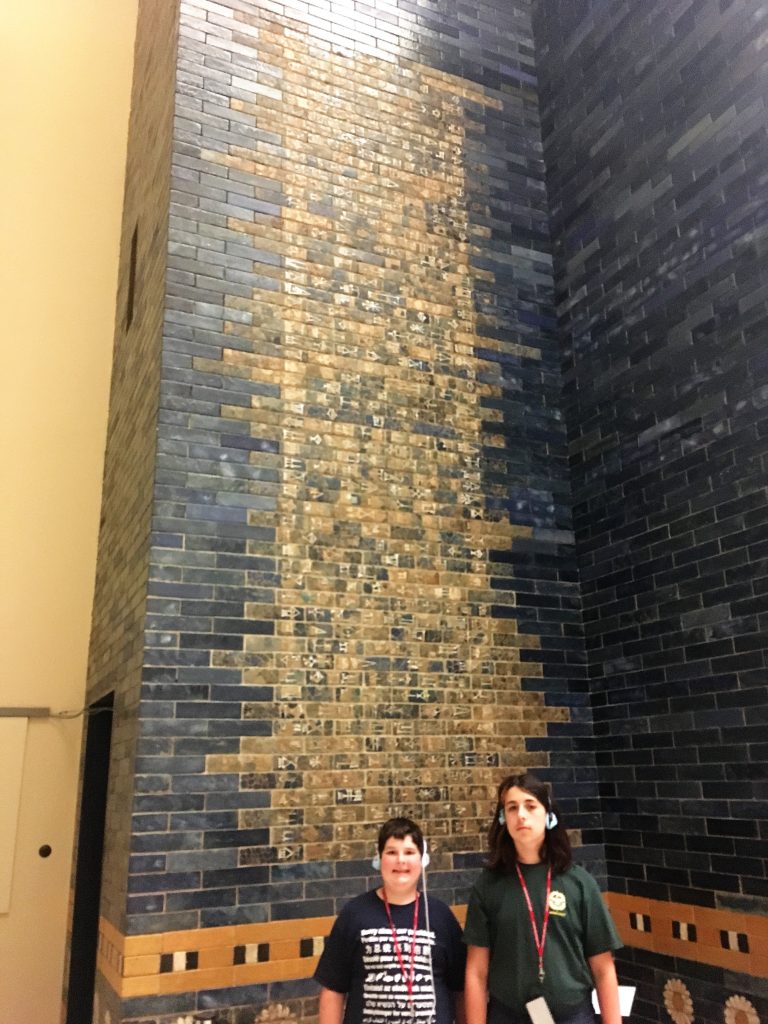 Seeing the Ishtar Gate in Berlin during a “Museum Day”.

When starting to plan for the trip, I remembered that I read some books by other homeschoolers who have traveled, and using their methods, plus my own knowledge of how my kids operate, I tried to figure out a style that seems to fit us. 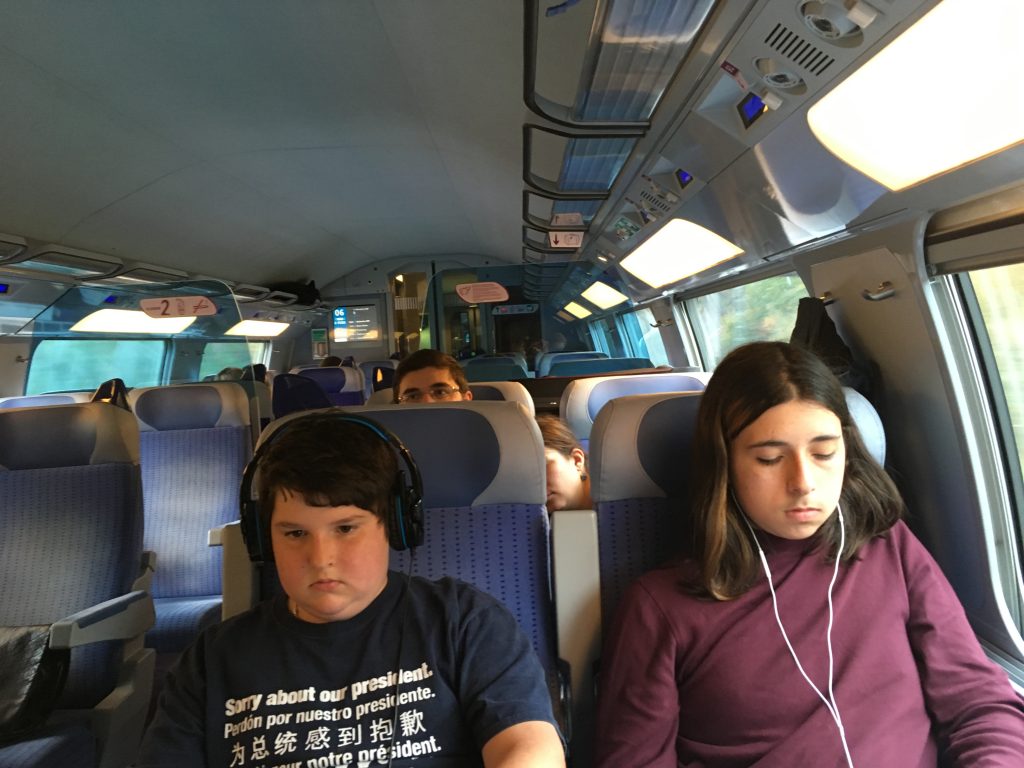 If the train has good wifi, we use it!

As both boys are interested in math and seem to be able to handle math mostly by themselves, I decided that we would have an online math course in which they would endeavor to do an hour a day of videos and/or online skill sets.  This has proven OK in that we have been doing math every day that we can, but sometimes either our schedule (travel or touring) doesn’t allow us to get any time logged for math, or the wifi at our lodging or on the train is so bad that we can’t load the math program. Luckily it’s only about 1 day out of every two weeks, so we can easily catch up, but this is Europe we’re talking about.  What about when there is no wifi for weeks when we go to Africa?!  I guess we’ll just have to wing it. 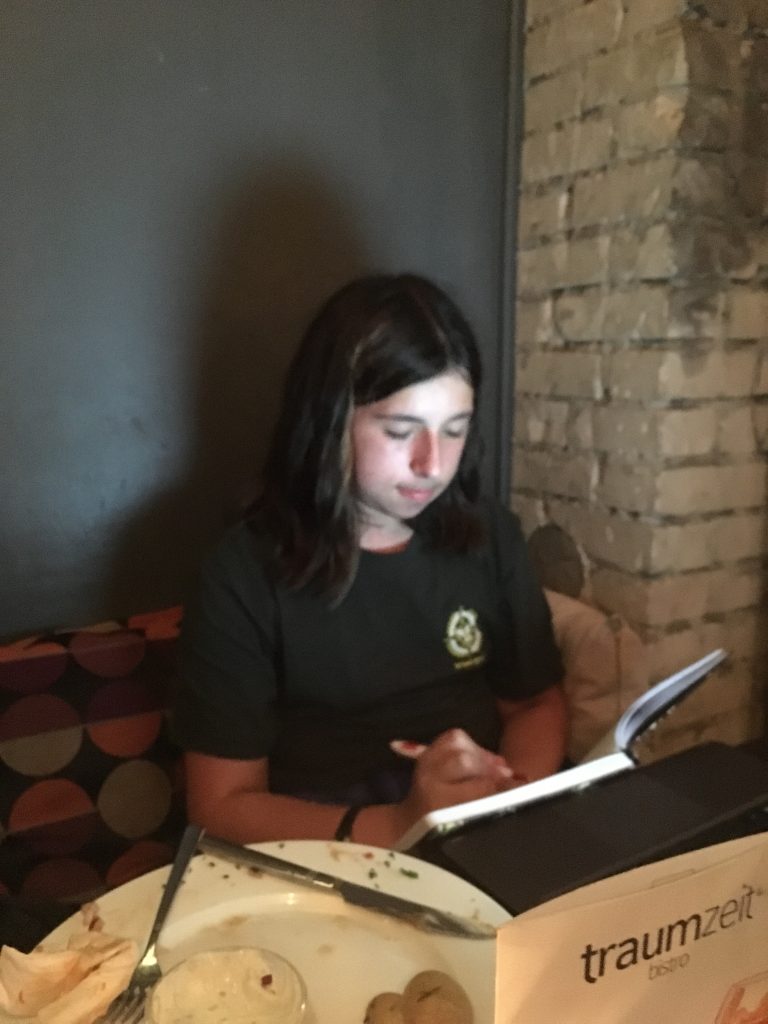 Doing math in a restaurant because the wifi was so bad in Hamburg.

While having the best museums in the world to visit is a big boost to our Art and History subjects, it is also a little overwhelming in scope.  We have basically been doing a melange of art and history from the Vikings to the Surrealists (today was a surprise exhibit of Magritte in Brussels).  There’s a lot of stuff in between!  Luckily, there have been several times when we have seen similar pieces of art in museums in different countries.  It’s been a great reinforcer of not only the art, but the history of that time. We are using videos to help us understand how to appreciate art and the historical context in which it was created.

I’m hoping my kids are taking in some of this.  They may not get it all, which is fine, but at least they can get a bigger picture of the world. 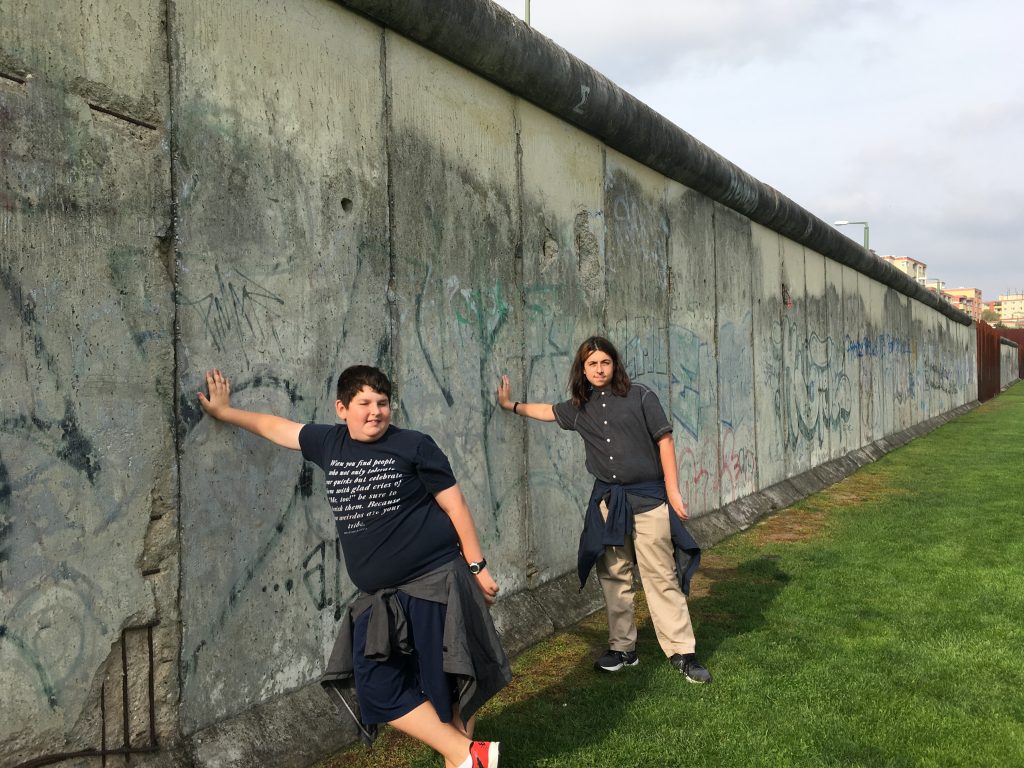 Standing at the Berlin Wall Memorial. Learning about history where it happened.

Learning a language goes hand-in-hand with travelling.  I think both boys have enjoyed learning a few phrases of the language of each country in which we have traveled. In conjunction with that, they have both decided to accelerate their learning and have downloaded  Duolingo to increase their vocabularies in specific languages.  I’m even brushing up on some language skills that have been long forgotten. 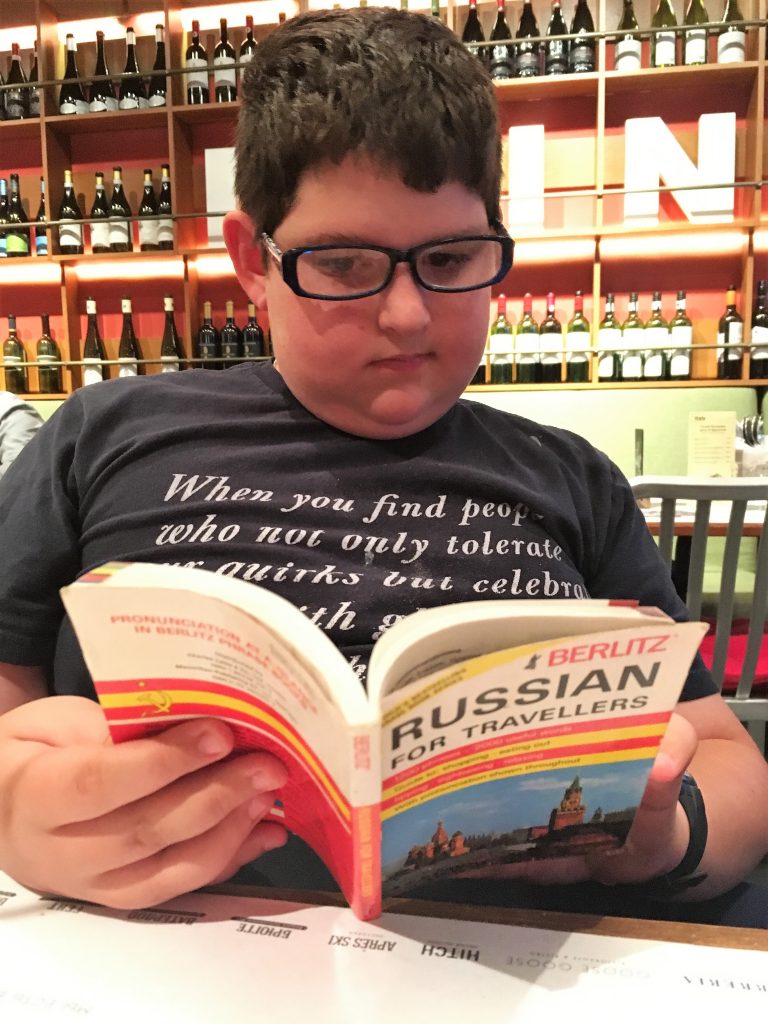 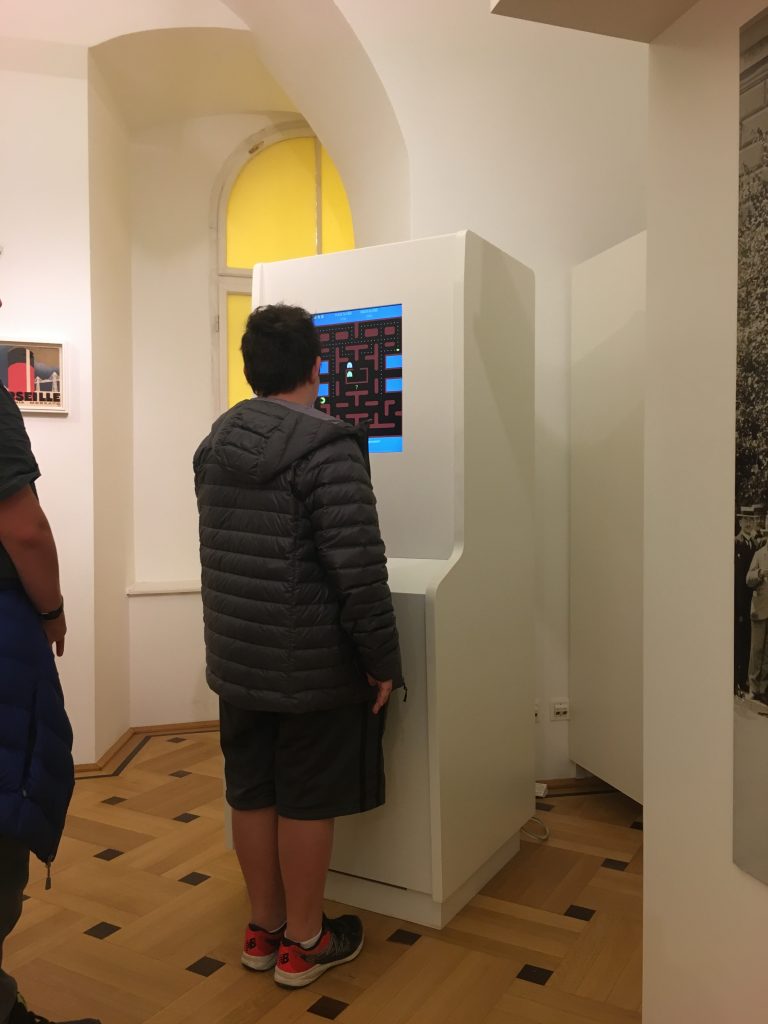 Forrest learning Esperanto via Pacman at the Esperanto Museum, Vienna.

While I try to plan all of the “educational” things, sometimes the kids surprise me and do it themselves.  The boys have been using an app to make up quizzes about things we have seen that day or things they are interested in, and we see who gets the most answers right.

These quizzes are not for the faint of heart.  Elijah’s “Fun with Flags” quiz would have made Sheldon proud!  Forrest made up a difficult quiz on the Atomium that we visited in Brussels.  I think I only got 8 questions out of 10.  It’s times like these I know that I’m doing the right thing and that even if they aren’t in a “school” this year, they are learning more than I could ever imagine.