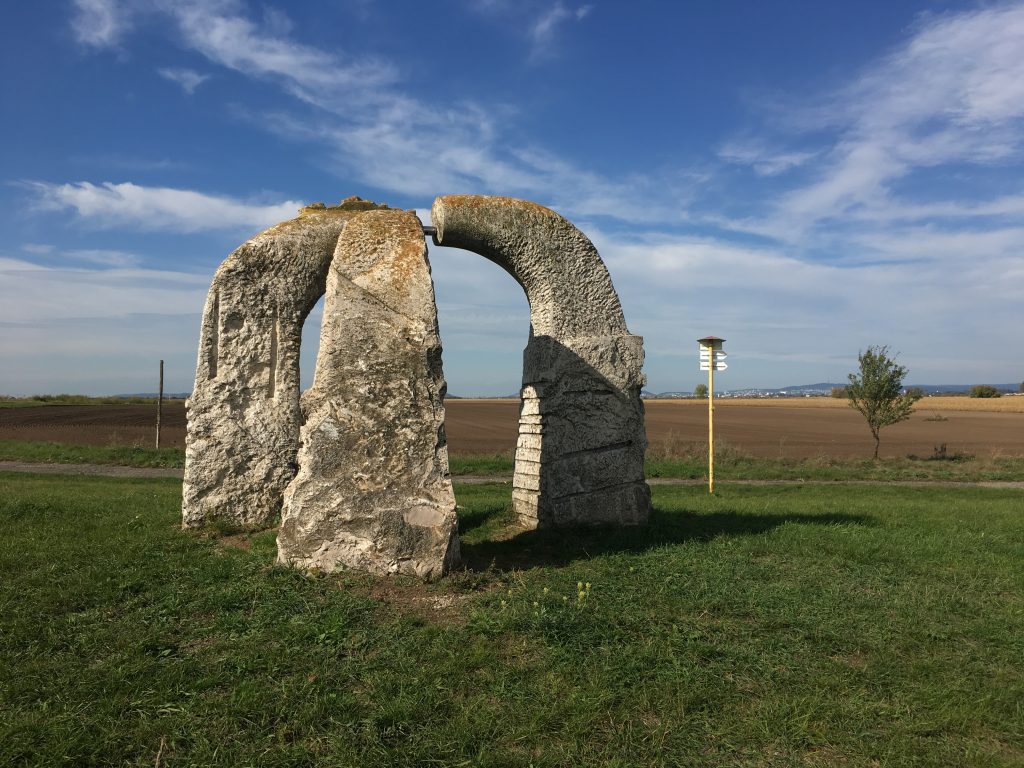 Twenty minutes south of urban Bratislava, and about a kilometer west of the freeway, lies Szoborpark. One may wonder, “What makes this park so unique? After all, it is just some strange statues in the middle of farmland.” The answer is that it is one of the world’s 176 tripoints.

A “tripoint” is a single point of land in which 3 countries meet. When following the border around a certain country, it’s when the country on the other side changes. This specific example of a tripoint is of Austria, Slovakia, and Hungary. The name of the park, Szoborpark, translates from Hungarian into “Sculpture Park,” which is exactly what it is. 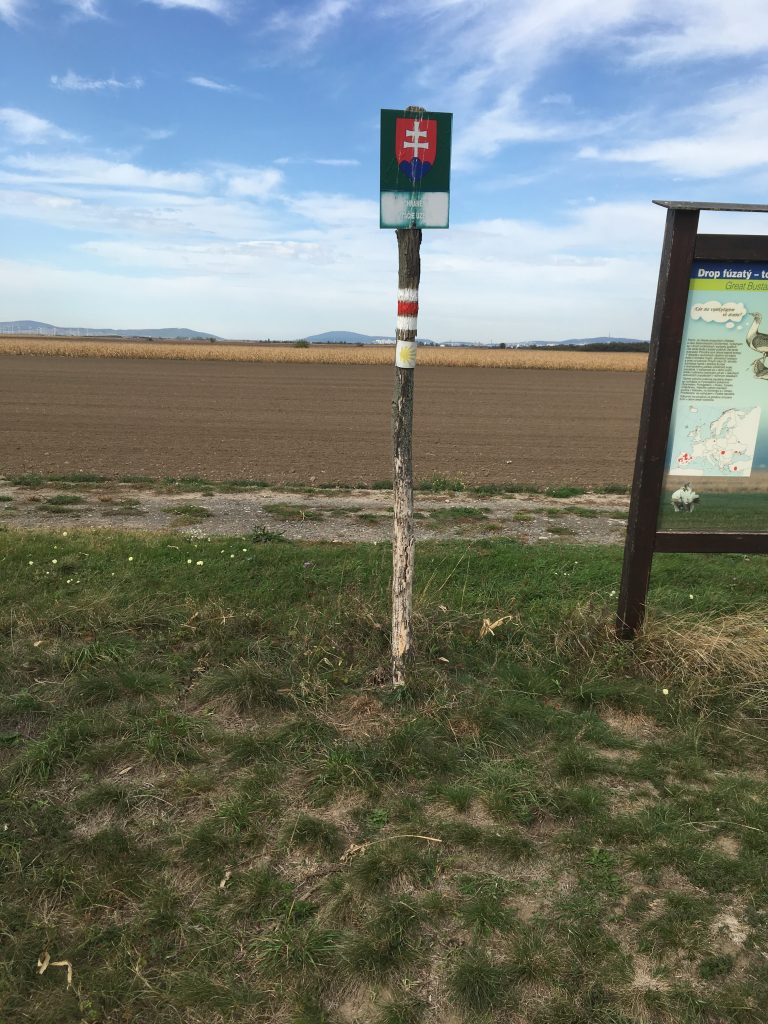 Border marker between Slovakia and Hungary.

During the Cold War, Austria was on the free side of the Iron Curtain, whereas Slovakia (Czechoslovakia then) and Hungary where located on the other side. Due to it being a location where two communist countries and a free country met, multiple people tried to escape the Communist Bloc here. The border fence that defended the Communist Bloc was hard to get over, but here it was unmonitored for the most part.  Once the Iron Curtain fell in 1991, the sculpture park was built. The sculptures, all created by international artists, utilize triangles in some way or another. The triangles symbolize unity among the three nations. 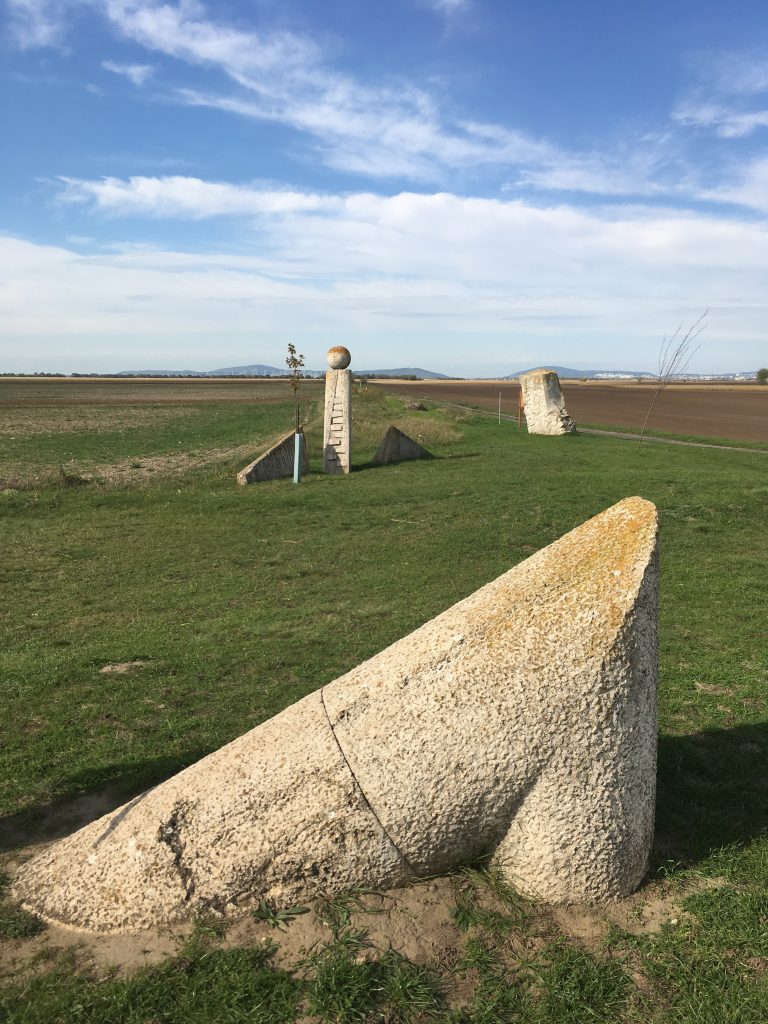 I first learned about the tripoint from a video in which a man visits 12 countries in 24 hours, using only public transport. The video ends with him in Austria at the tripoint. Since I saw that video in the summer of 2016, I have wanted to visit the tripoint and eat a picnic lunch at the triangular table. I knew we’d be going to Vienna on our trip around the world, so I decided to ask if we could take a day trip to Bratislava and the tripoint. After some planning, this dream did not appear so far away anymore. 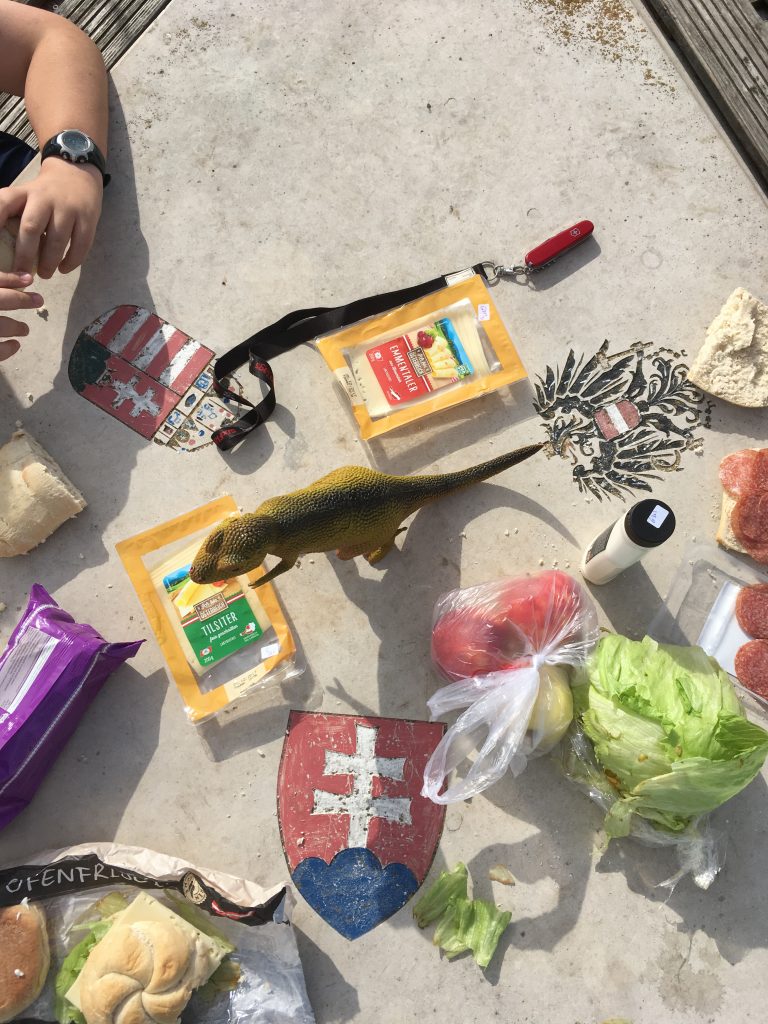 The table and our picnic lunch looking down from above.

On our final full day in Vienna, Austria, we took one of the hourly trains to Bratislava, across the Slovak-Austrian border. We got off at Bratislava Central Station at about 12:30, and met our driver outside. He drove us south about 20 minutes until we hit the Slovak-Hungarian border. From there, our driver, who was very worried about driving down to the Sculpture Park, dropped us off to walk the last kilometer. 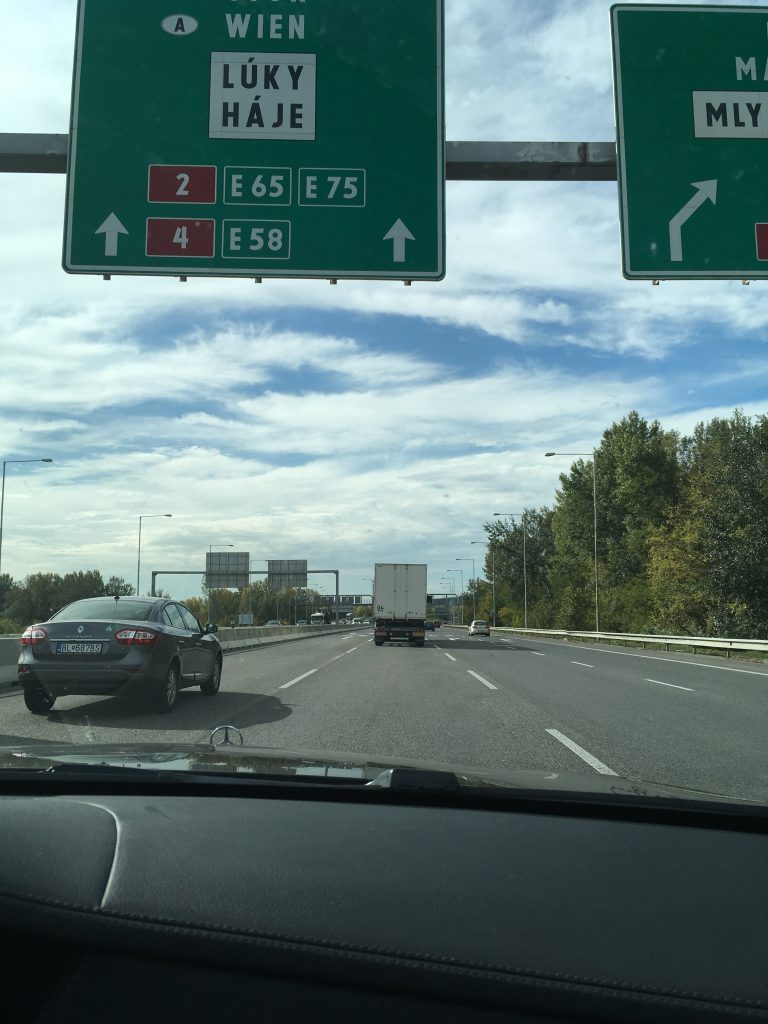 On the way to the tripoint.

We walked along the Slovak-Hungarian border. There were two dirt roads, one on each side of the border. For the most part we walked in Slovakia but due to the border’s crooked nature, we crossed into Hungary multiple times. We saw the sculptures in the distance, slowly getting larger. 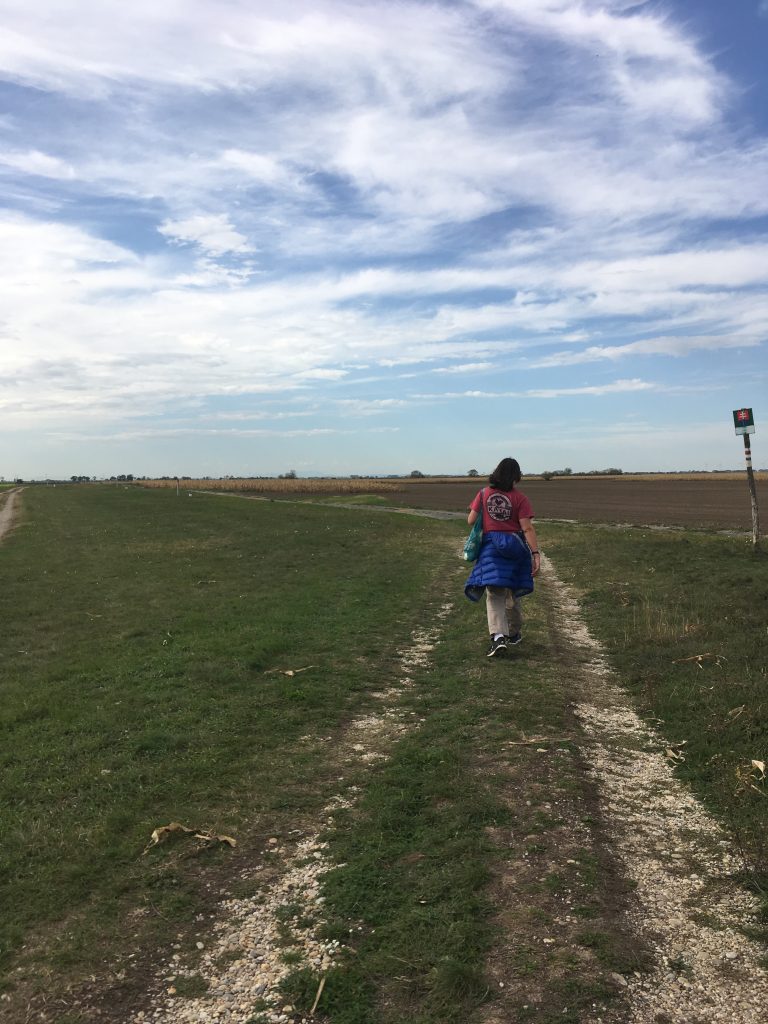 Walking out to the tripoint.

Once we arrived, we walked over to the triangular table in Austria. We all ate sandwiches, then walked around the park a bit, and took photos of us posing with different sculptures. 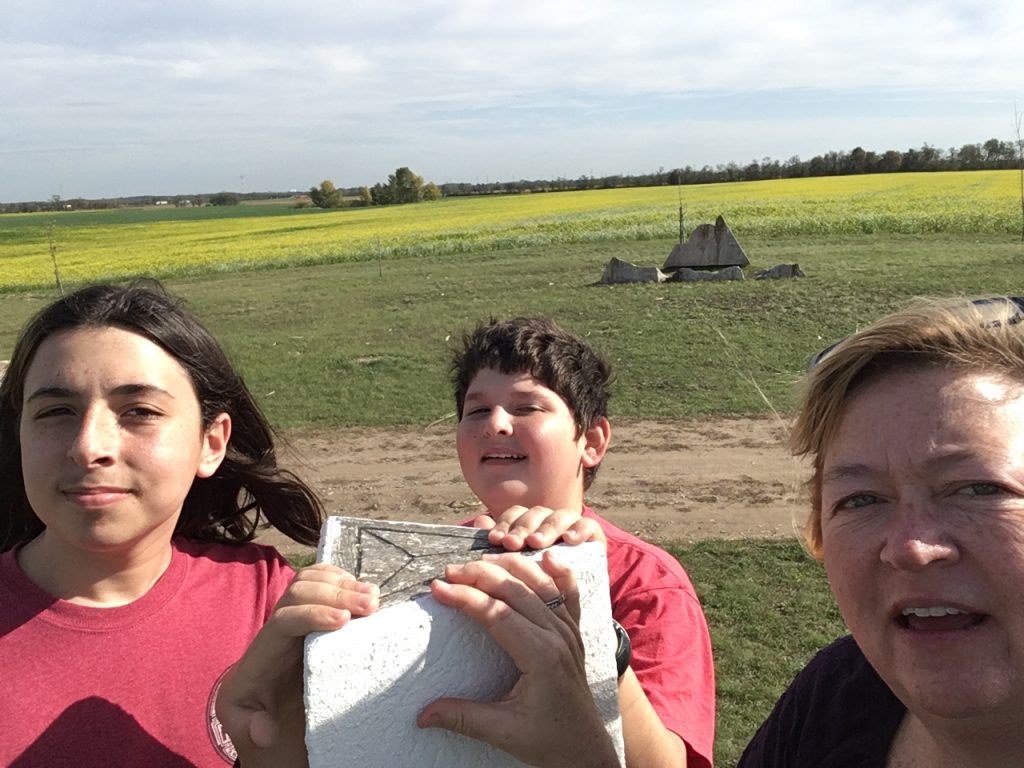 Each with a hand on the border of a different country.

The triangular symbolism was used in an interesting way. The most common sculpture was- for the lack of a better description- sort of like a triangular torus. Most of these types were partially buried in the ground, all in different ways. A triangular pillar in the center of the park showcases the exact point in which the countries meet. 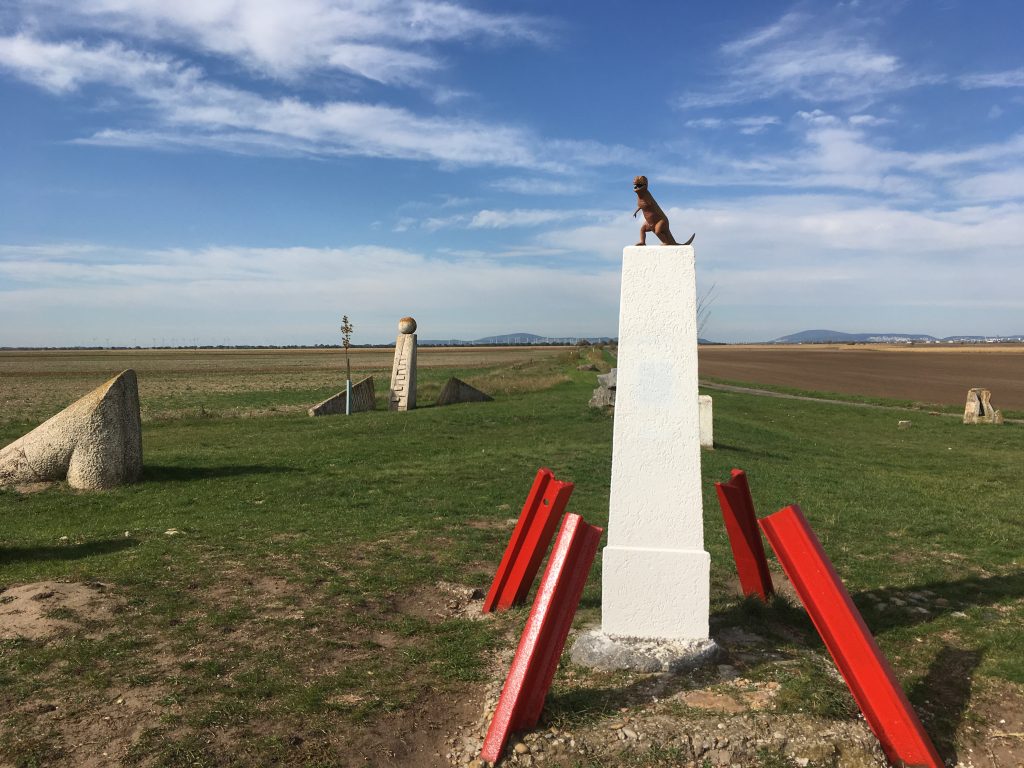 Trex on the tripoint!

All in all, this day was one of the best on the trip. I loved visiting a tripoint, it’s always been a dream. Hopefully this will not be the last one we visit on the trip.