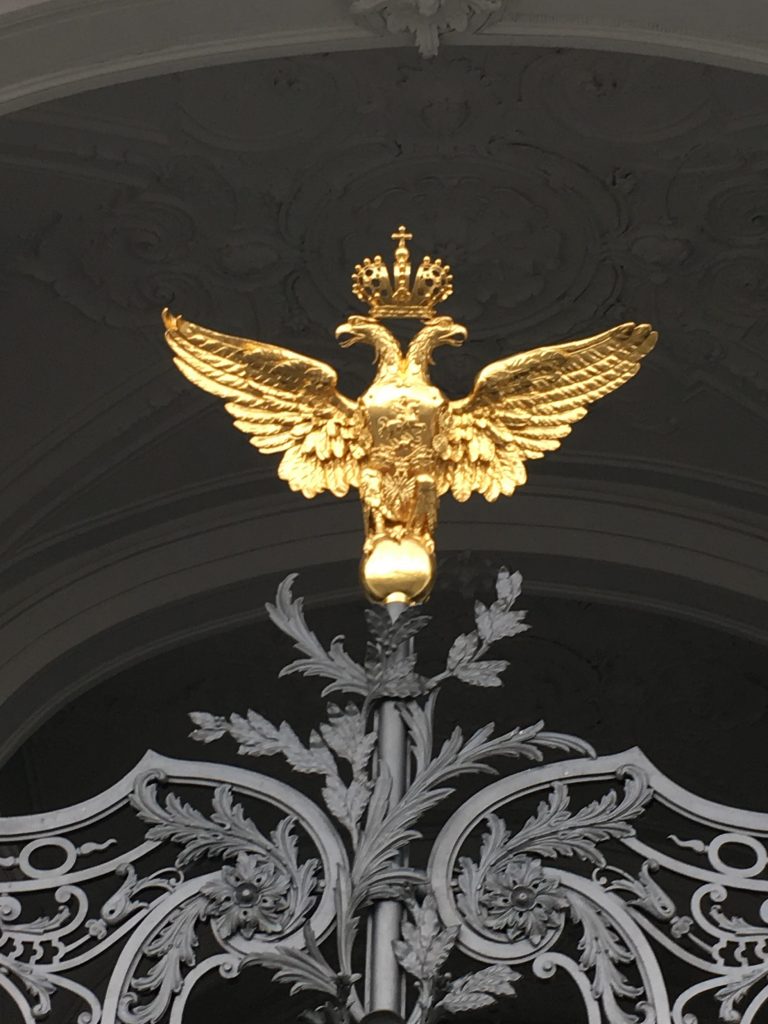 So, I decided to go to Russia. Now what?!

After thinking about it for 30 seconds or so, I realized I needed to book a tour to see all the sights that interested me.  I looked online and found several companies that offered tours.  The interesting thing about these tours is that they are all for small groups of people.  Not a group of 20-30 people in a bus, but a private car with a private guide that takes you around the city and will lead you into museums, palaces and churches. 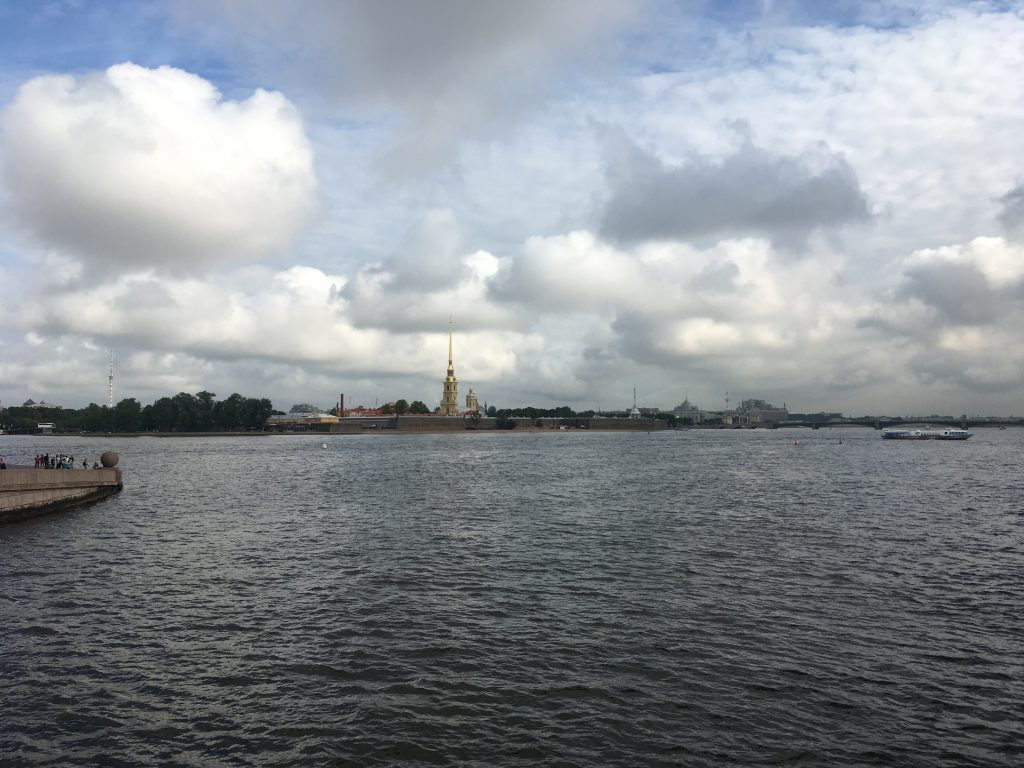 I was a little hesitant about this at first due to the cost, but not knowing any Russian or any of the Cyrillic alphabet, I knew it was probably a good idea to bite the bullet.  I’m so glad I did this.  There is NO way I could have planned and executed all the things we saw by doing it myself. There are usually no instructions for anything in English, even at museums, and trying to get a car to drive us around every day would have been a nightmare.  Traffic is pretty bad in the tourist area and there is nowhere to park, so having a driver and a guide is almost essential to having a good touring day. 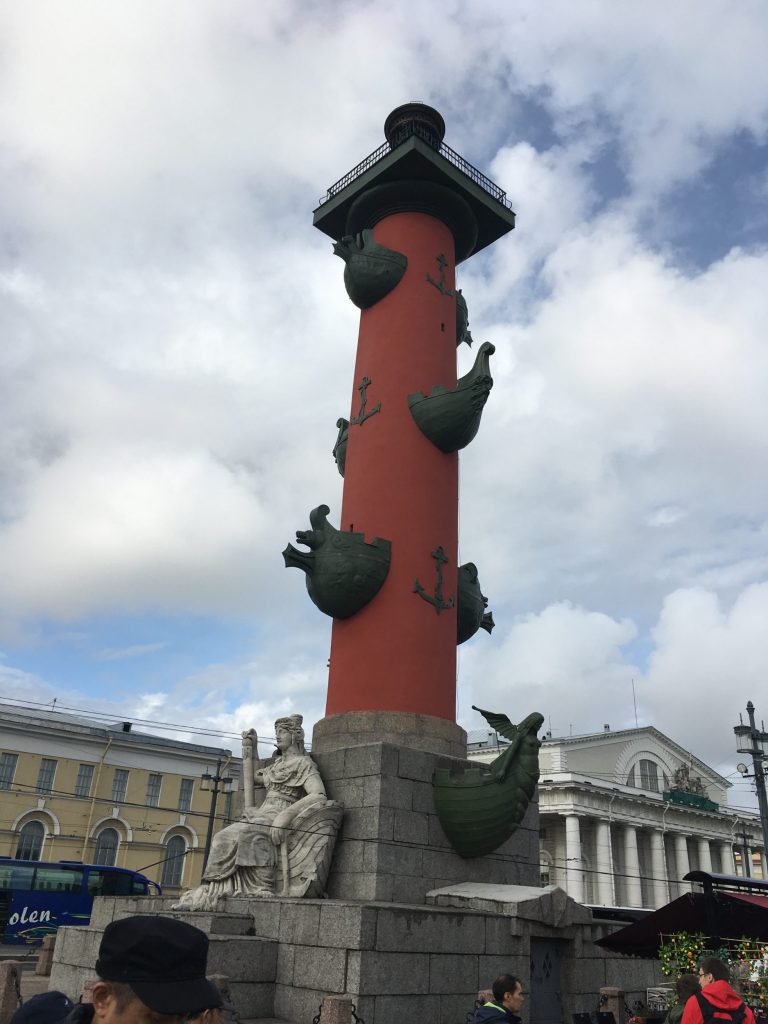 Our tour was a comprehensive 5-day journey through Imperial Russian history with a few add-ons of the Amber Room in the Catherine Palace, Treasure rooms in the Hermitage, and the Faberge museum. Our guide picked us up every morning, took us to whatever location we needed to get to, got the tickets (several places have timed tickets and she exchanged vouchers for those) and got us into the correct entrance at the correct time.  She moved like a ninja and skirted around large groups of other tourists to get to the front of the line, and got us into the museum or palace.  It was great!  I just followed her and tried to keep up. 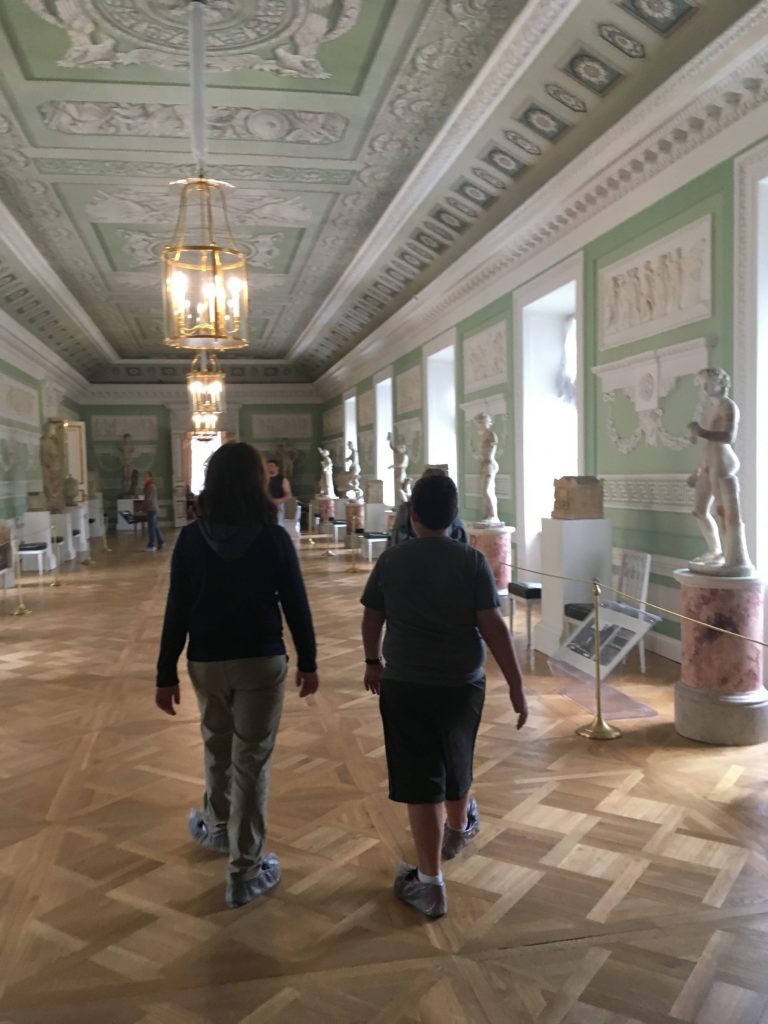 Once we were inside the location, she would also act as our personal tour guide and tell us about specifics including historical and artistic facts. If we had questions, she knew the answer.  I can’t say I got as much information out of it as I would an audio guide, but I never felt like I hadn’t learned something or did not understand the relevance of what she was saying, and I could always ask her to clarify. 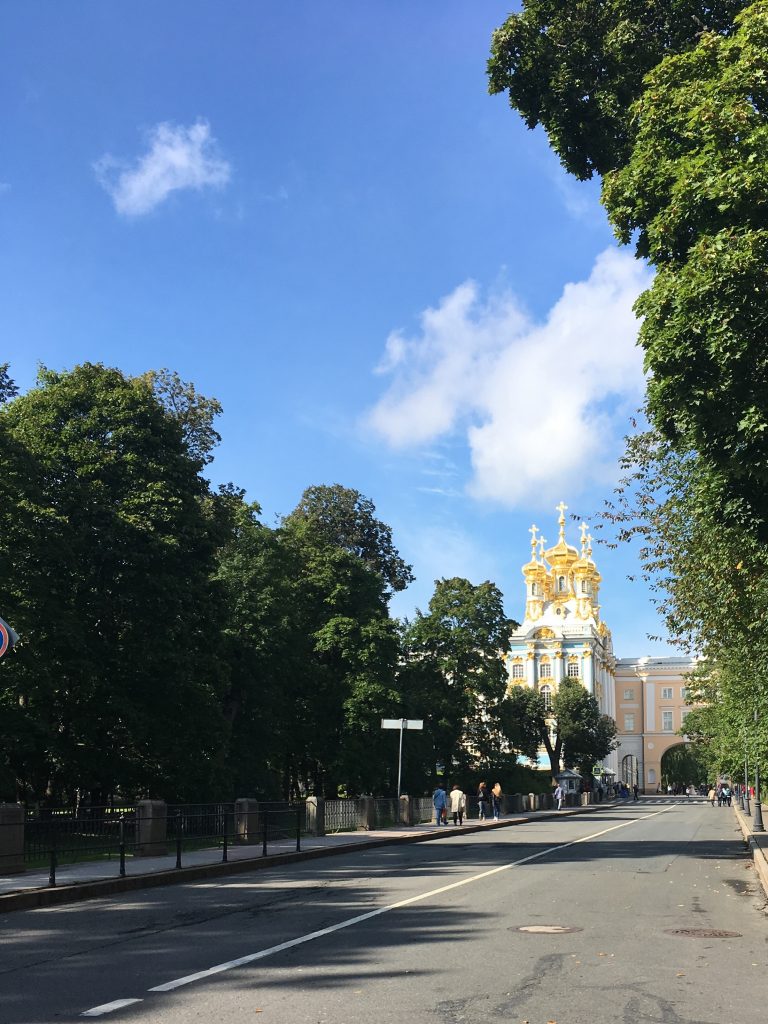 These private tours turned out to be very common for westerners.  I saw small groups, usually 2-5 people travelling together with one person doing all the talking.  There were guides I overheard speaking in German, Spanish, French, and English.

I say they were the most popular for westerners, because it was very, very different if you were from Asia. There were bus loads and bus loads of Chinese tourists who far outnumbered any other group.  It was very interesting to see that the majority of people at a site were Asian.  Another interesting thing our guide told us was that the Asian tourists do not really add to the local economy in terms of eating or hotels.  All of the establishments they use are run by Chinese tour companies with permission of the Russians.  They eat Chinese food instead of trying the local cuisine.  I am somewhat skeptical of that, but our guide pointed out some of the common restaurants used. She seemed to be torn between being annoyed with that fact, and being happy that the tourist industry has brought some prosperity to people with jobs in the tourism industry like hers. 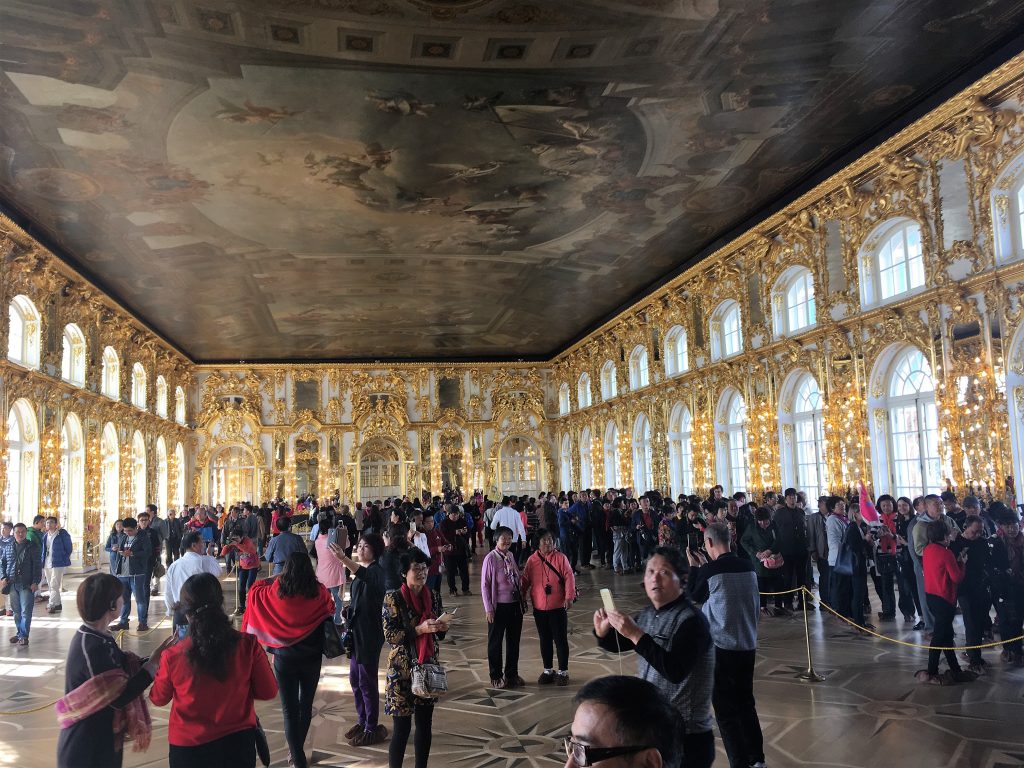 It is evidently very difficult to become a tour guide.  You must be licensed, and you must take exams every year to qualify.  You must have knowledge of every church, palace and museum collection including history, art, and design.  She could rattle off facts very quickly and her knowledge of Russian artists was impressive. She would dissect a painting for us in 5 minutes and then move on to a totally different room and do the same thing with some other kind of artwork.  It turned out our guide is a teacher at the university (I’m not sure which one) in Russian literature and language. She also knew many of the staff in the palaces and museums as well as other guides we saw giving tours.  I asked her if it was a good job and she said yes, that it did have a level of prestige because of the testing required. 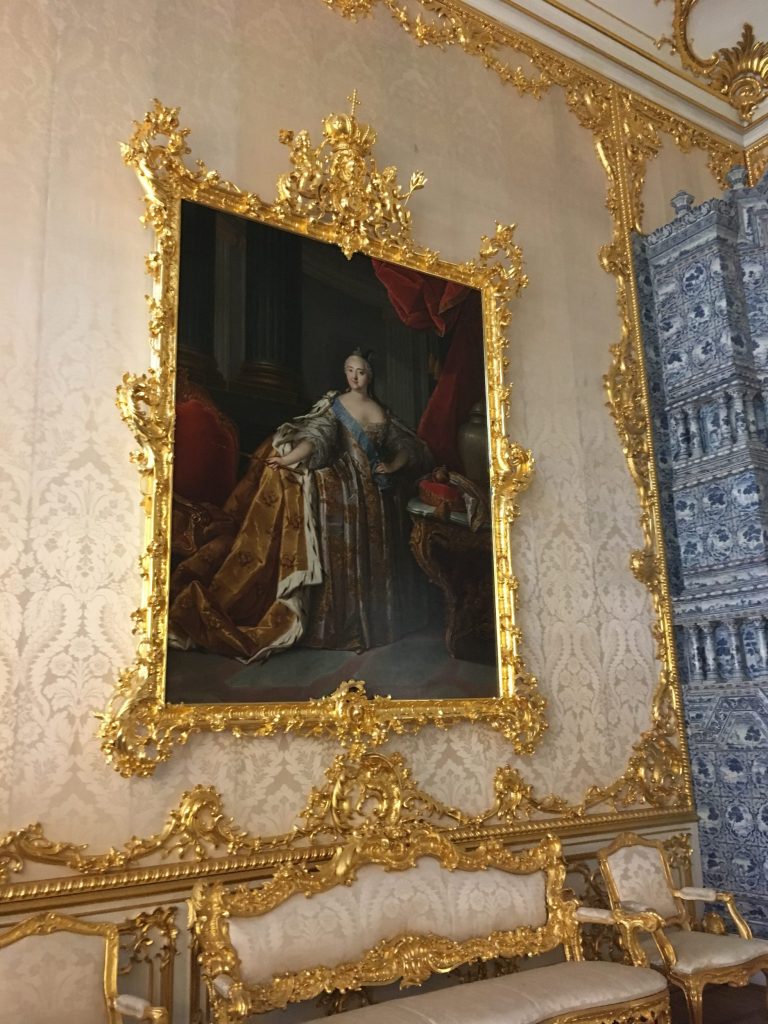 All in all it was a great tour of the most interesting sites in the area.  At the end of our day, if we had the energy, we also had time to wander around by ourselves.  We only did this 2 nights out of 5 because we were so tired after walking through palaces and museums all day. I highly encourage anyone who may be thinking of visiting Russia to consider touring with a personal guide. You’ll get a personalized trip and also a local perspective on what it is like to be Russian in the 21st century.