We set out to discover a little about Costa Rica and ended up learning a lot about sea turtles, ourselves, and “Pura Vida” or “pure life.”  This trip was a special add-on to our adventures around the world since we sold our house and didn’t really have a place to live in August. So off we went to Costa Rica to do a little volunteer work.  Our first day we landed and spent the night at a hotel in Liberia. Liberia reminded me of a small town trying to be a bigger town.  There is an elevated freeway right through the middle of the town. I assumed that there was no traffic because it was a weekend, but we later saw that there just isn’t much traffic!  Liberia has about 50,000 people and the “city” quickly fades into fields of corn, rice and aloe plants.  The greenery comes in all colors, from the darker huge trees (a type of oak?) to the tall thin teak trees planted in lines for later harvesting, to the lighter green fields surrounded by more trees used as fencing.  I was most impressed with this initiative to use nature as fencing for property boundaries.  The trees are planted and then barbed wire is strung between them and eventually the trees grow around it. The trees are trimmed as necessary, some topped off and the dead trunk serves just as well.  I assume this method is less expensive than harvesting wood, planting poles and then dealing with the termites and ants that will invariably devour the wood.  It also made a lovely living fence.

Our second day we were driven through the countryside towards the tip of the western peninsula on the Pacific Ocean.  After the tarmac gave way to dirt and gravel roads, we arrived at San Francisco de Coyote for our first authentic Costa Rican lunch.  I had a traditional dish of casadas de pollo.  It was a simple chicken breast (fried) with sides of hot vegetables (corn, onions and zucchini?), rice, beans and a cold cabbage salad.  It was very tasty.  We continued on our way to the beachfront accommodations. I’m not sure what to call where we were.  On Google maps, it is listed as Playa Coyote, but while we were there, we called it Playa Costa de Oro.  Nevertheless, it was beautiful and hot.  Hot, hot, hot.  Not just hot, of course, since this is Central America, but humid. The kind of heat and humidity that a northern Californian just can’t handle for about 4 days until the body finally acclimates. Four long days and nights.  I have never been more moist.  I love that word, “Moist.”  The constant heat and humidity resulted in many cold showers, laying on the bed under the fan waiting to dry off – sort of.  It’s hard to complain when you see photos of where we stayed.  It was the beautiful, tranquil, brand new (open 6 months) yoga retreat called Zen Spirit.  We had an outdoor shower, clean, fresh, stiff white sheets on the bed (which I only ever needed at 4am when there was a slight chill from the fan) and a view of the palm trees and ocean beyond that leads people to oohh and aaahh and think jealous thoughts. 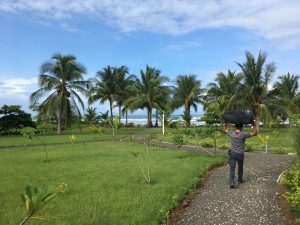 Our hostess at the Zen Spirit was a fabulous woman named Sabine. I learned later that she and her husband (an architect) had built their home on the hill above the retreat and had lived there for 12 years.  In the last 2 years, they had put all of their energy into designing and building Zen Spirit.  There were several cabinas with 1, 2 or 3 beds suitable for couples or families. The pool had just been finished the week before we arrived.  It was amazing.  Each morning Sabine served us a homemade Costa Rican breakfast ranging from pancakes, eggs, empanadas or rice and beans along with fruit, a fruit juice and coffee that could peel paint.  I’m sure it was delicious, as it was Costa Rican, but I am not a huge coffee drinker in general and needing a caffeine boost every day, this was the only option I had.  (There are no grocery stores/7-ll’s on Costa de Oro.)  I used at least 1/2 the milk pitcher on the table and a few spoonfuls of sugar to make my coffee taste as much as possible like something else.  But it was still great! 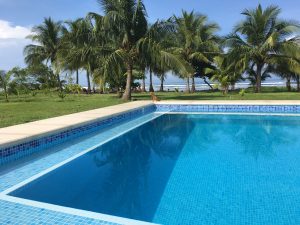 We received an informative presentation by the lead biologist on the turtles project about the need to save the turtle populations and the education of the local population.  This group is called Crema and they work together with a volunteer group called Turtle Trax to patrol beaches, move nests to hatcheries where the eggs will be safe from humans and predators, and then move the hatchlings onto the beaches as soon as they come out.  The amount of manpower to patrol beaches every night from July to December, move the eggs, and then have 24 hour watches during hatching season is astronomical.  And it’s all done by a scrabbly group of college students, biologists, gap-year kids and adults like us who pay to come down here and put in some time.  I learned a ton about the turtles we were trying to help save.  The primary species who come to lay eggs at Costa de Oro are olive ridley turtles.  They weigh about 100 pounds and remind me of large, flat dogs.  That first night, our group was on the late patrol of the beach (10pm – 1am).  Our first turtle was spotted by the volunteer leader, Mead.  I would have walked right over the faint slashes in the sand, but luckily he’s done this a lot and knew right away what they were.  It turns out our momma turtle had a “false crawl.”  This is when the turtle comes up onto the beach, decides that things don’t seem right, and turns right around to head back into the waves.  At least we got to feel her shell and see how big she was. She was already tagged and had laid eggs at San Miguel beach to the north this season. Turtles lay two batches of eggs each season.  They don’t start laying until they are 15-30 years old and they only live to be about 50 years old in general. 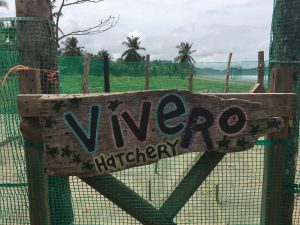 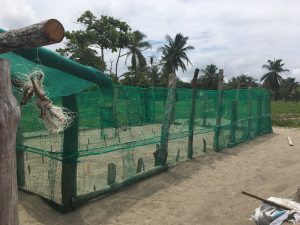 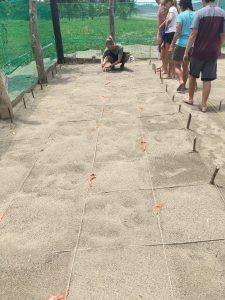 The next day we went to the volunteer house and had a short presentation on the hatchery where we would move any nests we found while on the night patrols.  We also participated in exercises to help us learn to find the nests in the sand.   Back at Zen Spirit, we were encouraged to take naps as we had the late patrol that night from 10pm – 1am.  We were really excited to see a turtle, but unfortunately, the only nest we found had just been plundered by humans and dogs.  The footprints easily told the story of the poachers coming up on the turtle, digging up the nest (possibly while she was still there) and her distress as she went back toward the water.  I can’t imagine how scared she must have been of the dogs who were probably circling her and barking.

The third day saw us traveling to a nearby fishing marina where the local fishermen took us up an inlet into the mangrove swamps.  It was hot and humid, but the breeze generated when we went fast in the speedboats was fabulous.  We saw lots of crabs, a snake, a baby crocodile, a dead tapir floating in the water, and some birds. It reminded me of the swamps of Louisiana.  Did I mention it was hot?  After we left the fishing village, we went to a local restaurant where we had an fantastic lunch of red snapper. Our bellies full, we were taken to a nearby beach where most everyone went into the ocean for an afternoon swim. 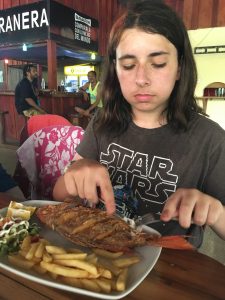 Our patrol that night was later (1am – 4am) and we found a nest!!  The turtle had come up onto the beach when we saw her tracks and she had already started digging.  While our leaders took measurements and notes, we stood behind the turtle (she was facing landward) so that she would not be distracted.  The volunteers had told us that the turtles would not know we were there if we stayed quiet behind her front flippers and did not have any bright lights.  They go into a trance of digging and laying the eggs.  With red lights, gloves and a click counter, the kids retrieved the eggs from behind the turtle as she laid them, and placed them into a bag for transport to the hatchery down the beach.  We got 83 eggs that night and safely put them deep in the sand (32cm) behind the fencing and boards of the hatchery to prevent disturbance from crabs, dogs, birds and humans.  Only about 7 eggs out of 1000 will survive to adulthood.  I hope our small efforts help to give the turtles a chance to do that.

The last full day at Costa de Oro was spent at the a local fishing village called Bejuco.  There are about 15 people living there, and their matriarch made us another fantastic fish luncheon.  The boys (and anyone else who wanted to) got to make their own tortilla and cook it over an open flame behind the “kitchen” building, which I think also doubled as their house.  It was hard to tell, but I think there were dirt floors, running water and electricity as well as a flush toilet, so basically, all the comforts of home. The people were happy, well fed and passionate about saving the turtles.  They had their own hatchery and patrolled the beach where they lived every night to protect the nests from poachers.  We had a delightful time visiting and then returned to Zen Spirit to take naps.  Our last patrol on the beach did not yield any more nests, but we did see two sets of tracks.  One set showed the turtle trying to dig a nest two separate times, hitting roots and then giving up.  The other set of tracks was a large horseshoe shape with no nest.  Another “false crawl.”   In total, the two patrol groups saved 5 nests over the 4 days we were there.  Along with the other nests in the hatchery, there were a total of 71 nests. 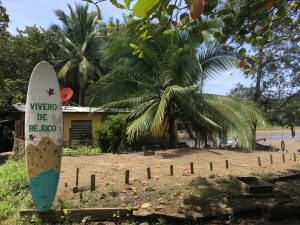 We left early the next morning with many smiles and hugs to the volunteers and our hostess.  The Costa de Oro will hold special memories for us, and I think we would enjoy going back someday, especially during nesting season to check on the volunteers at the hatchery. 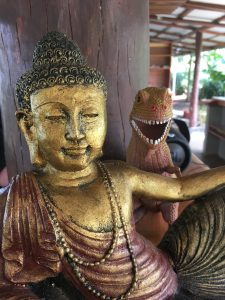